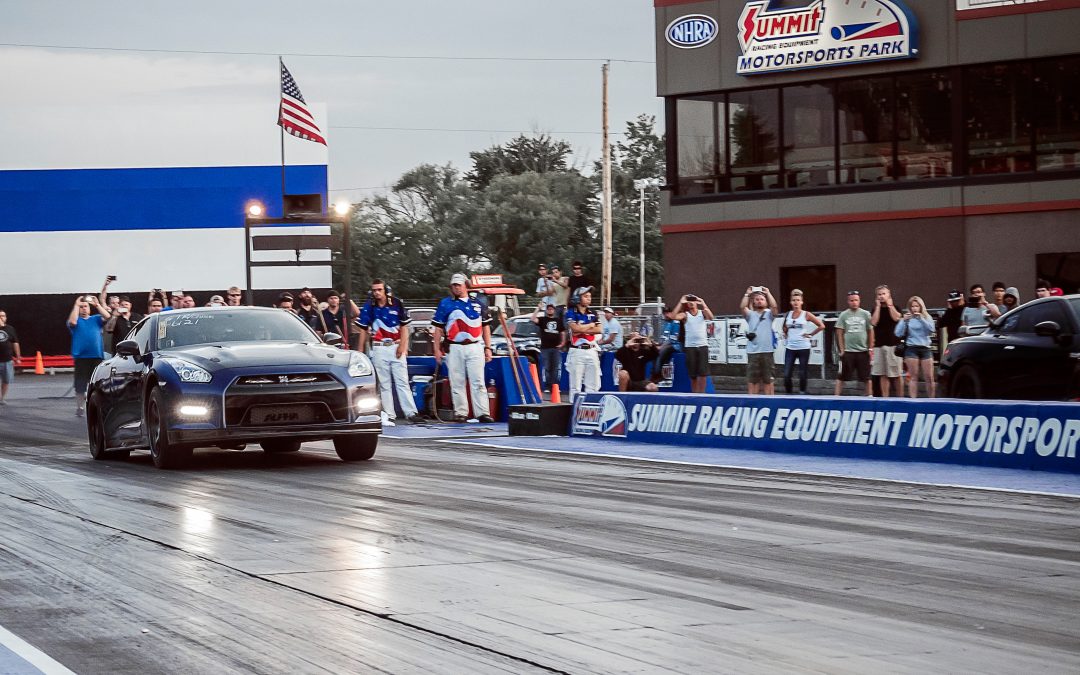 Every year, our goal at AMS Performance has been to run quicker, faster and break some records. 2014 has proven to be quite a success for AMS and our affiliates. So much so, we wish to present you the 10 Best Accomplishments of 2014 achieved in part by our company, sponsored race team, dealers and customers using AMS and Alpha Performance manufactured parts.

With 6 rounds of head-to-head roll racing to complete, no luck of a bye run and being heavier than the competition with far less displacement, it would seem that Omega had all odds stacked up against it at this Texas Speed Syndicate event. In the eyes of some, it might have. . . yet the V-6 twin-turbo underdog took down the competition in undeniable fashion – winning the title of Texas Invitational’s King of the Streets!

With no rest from the Texas Invitational event, Omega was back at the drag strip a day later to reset the GT-R 1/4 mile record. It had been over a year since Omega ran the first ever 7 second GT-R 1/4 mile pass. With the weather being too cold to run a decent time back near our hometown of West Chicago, IL, the team was dead-set on running a 7.7x ET at Royal Purple Raceway. Little did the crew realize, they would have to contend with a collision between two massive storm fronts and a clock malfunction the first day only to come back the next day and face 90 degree temps with a density altitude (DA) of over 2300ft!

This is the final hot lap of the season for the LYFE Motorsport Alpha 10 GT-R (formerly RaceCo) in the Global Time Attack Unlimited AWD division. Throughout the 2014 season, LYFE Motorsport racked up a total of six 1st place finishes – taking home the GTA Unlimited AWD Championship Trophy! Not to mention, they also took 1st place in the WERC 6 Hour Endurance Race further showcasing the reliability of our Alpha 10 GT-R Turbo Kit!

A sub 10-second full-weight Subaru STI isn’t something you see often especially if it’s a 2015! The 2015 Prime Motoring STI owned by Jr. Tuned was equipped with our AMS Subaru STI/WRX 950R Turbo Kit and Front Mount Intercooler Kit for this record pass. It actually ran a mid 9 second pass with a best ET and trap speed of 9.68@147mph! Still full weight with all the amenities!

Equipped with our Alpha 7 Performance Package and tune, the 2014 Alpha 7 E63 AMG 4MATIC becomes the first of its kind to run a 10 second 1/4 mile time. If the back-to-back
10.8x passes aren’t enough to convince you of its consistency, watch video of this Alpha 7 E63 at the track taken a few weeks later where it runs a total of ELEVEN 10 second passes in one night!

Even with over 1600hp available on command, believe it or not, the Diamonds by Wire Alpha 16 GT-R wasn’t the most powerful GT-R at The Shootout hosted by Buschur Racing! However, this video shows it certainly was consistent! This particular GT-R owned and driven by our Alpha privateer customer, Gideon C. qualified for the GT-R Quick Class which included two very experienced racers – Lucas English of English Racing and John Shepherd of Sheptrans. Gidi never raced head-to-head at a drag strip a day in his life, yet his excellent reaction times paired with his blue Alpha 16 GT-R earned him a commendable and exciting win in The Shootout’s GT-R Quick Class event!

It was important to keep this Alpha 16 GT-R build for the Spring 2014 Moscow Unlimited under wraps at AMS. Even though the Russian racers of the Unlim 500+ are great sportsman, they are extremely competitive and the build of this white Alpha 16 GT-R for our customer Dmitry was to be shipped out for the event as a bit of a surprise. Well, it did and it definitely took top honors with a prestigious win at an event unlike any private racing competition in the world!

It’s not often we have a 1/2 mile event near our hometown of West Chicago, IL. Often, we travel 1,000 miles or more with only one or two select vehicles to compete. This was not the case with the 2014 Wannagofast Chicago Half Mile Event. Our camp for this event consisted of two customer Alpha 16 GT-Rs, an Alpha Ronin GT-R, Alpha 12 GT-R, Alpha 10 GT-R, Alpha 10 Porsche 997TT, Alpha 7 E63 AMG 4MATIC along with a slew of other Alpha built vehicles participating from across the country. It was an incredible showing for AMS – taking home top honors in the 6-Speed & 4-Door Sponsor Class, 1st Place – Day 1 and a tie with Nth Moto for 1st Place Overall.

The power and traction of the Alpha 16 GT-R makes it one of the quickest true street cars in existence. As part of a pre-delivery test for our customer, this full weight Alpha 16 GT-R ran 0-200mph in less than 2300 feet at the Texas Speed Syndicate TI airfield on 20″ street tires – a blistering speed attained on an un-prepped surface. Less than a day later, it ran an 8.11@176mph pass at Royal Purple Raceway. Not bad for a 4000+lb car with driver!

In preparation for the Texas Invitational, we brought Omega to Great Lakes Dragaway for testing. With seasonably cold weather and slicker track conditions, Omega wasn’t going to hook a good enough 60 foot time to earn a new GT-R 1/4 mile record. It did, however, reach a goal of ours by hitting a 190mph trap speed. Crank the volume to 11 and get a better idea of what Omega sounds like running down the track. Amazingly, at mid throttle or cruising speed, the sound level of this 2000HP GT-R isn’t really too much at all.