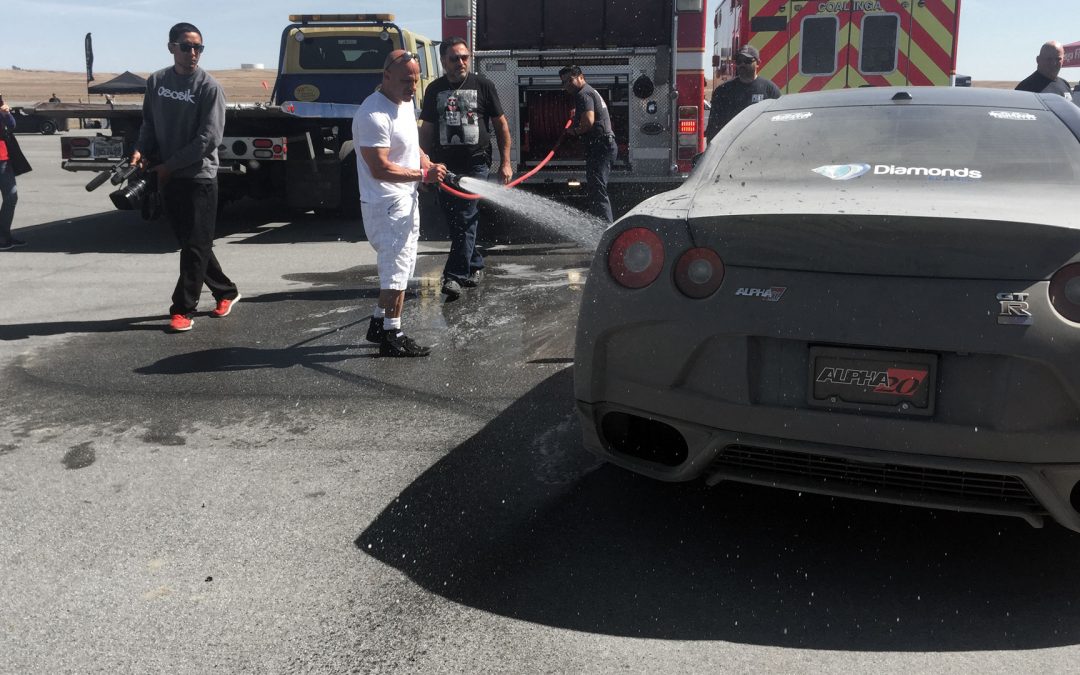 Fresh off his big win at TX2K, AMS had another successful outing with Gidi and his Diamonds By Wire Alpha 20 GTR at the Shift Sector Airstrip Attack 8.  The car posted a number of 220+ mph runs with a best of 222mph in a true standing half mile making it the fastest GTR at the event!

222mph In The Half Mile, Then A Spin In The Dirt

The last run was not without its drama. After Gidi crossed the finish line with a solid 222mph run, the car went off track at over 200mph spinning through the dirt for what seemed like another half mile.  In a massive cloud of dust, the car spun in between many hazards on the side of the airstrip.  Luckily, both Gidi and his Alpha 20 came out okay other than hitting just one runway light damaging just the right rear wheel and possibly some suspension components. Unfortunately though, without a spare wheel and possible suspension damage, he was forced to the sidelines for the rest of the event.

“We still had more power to go on the tune” Martin Musial, President and Tuner of AMS/Alpha Performance said, “We were hoping to best our Alpha Omega GT-R’s world record half mile run of 224.9mph today.  Thankfully both Gidi and his car will have a chance to run faster in the future.  It was scary to watch something like this happen to anyone – especially a friend.”

In an effort to increase the shut down area at Shift Sector, the management had actually shortened the track to a true half mile (2640ft.) for 2015.  Primarily a roll race competition, in prior years, the track was actually a little longer than a half mile.  “It was a good move to shorten the track” noted Musial.  “It’s also nice that we can compare this event to similar ones like the WannaGoFast events which also run a true half mile.”

A Successful Test For The Experimental Alpha Engine Program

Although Gidi’s Alpha 20 is not sporting the full Alpha Billet VR38 Engine Block of Alpha Omega, the car is running some new components – further improving the Alpha engine program.  “Overall I was pleased with the results at Shift Sector. We have some experimental engine components being tested on Gidi’s car, one being our soon to be released Alpha Billet VR38 Engine Girdle and some other internal tricks.  Over the past 3 events, this Alpha 3.8L engine has been taking everything we’ve thrown at it without skipping a beat.” stated Musial.

Stay tuned as the Alpha Team take Omega back to the Texas Invitational where we will be defending our title of “King of the Streets” in mid-May.