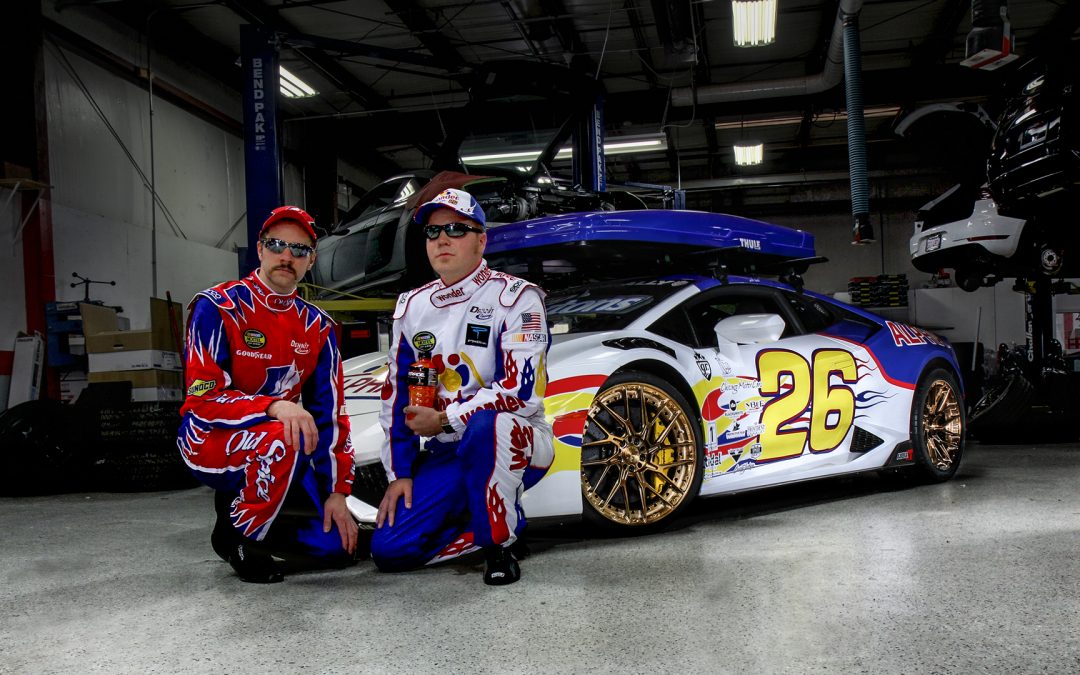 What Is The GoldRush Rally?

The GoldRush Rally is part Cannonball Run, part One Lap of America combined with a huge party. During the day you drive to the next city where a 5 star hotel and VIP party await you. Along the routes there are special driving experiences at race tracks and other unique motoring venues. This years event started in Boston and weaved its way across the United States to LA over the course of 9 days. Although the trips between cities are not timed, when the roads open up there is a fair amount of spirited driving to get your adrenaline pumping.

The Alpha 10 Twin Turbo Package for the 2015+ Lamborghini Huracan LP 610-4 consists of 2 tried and true Garrett ball bearing turbochargers and 2 Garrett intercoolers. It is a true bolt-in system requiring no cutting or drilling of the vehicle. The Alpha 10 is a stage 1, of sorts, safely utilizing the stock engine and transmission. The only driveline improvement needed is the included Alpha DCT Clutch Upgrade. By utilizing the stock 12.5 to 1 compression ratio throttle response is just like stock causing no detrimental effect of part throttle and low rpm operation. The powerband is only enhanced in the mid-range and top end where the turbos increase horsepower output to over 1000HP on 93 octane pump gas, a 400HP increase!

GoldRush is all about crazy, eye catching wraps and themes. At AMS we LOVE this kind of stuff! Our friend and vehicle owner Jordan had the perfect plan – wrap the car like the #26 stock car from Talladega Nights and dress up like Ricky Bobby and his faithful companion and me, AMS VP Arne T., as Cal Naughton Jr. If that wasn’t ridiculous enough we opted for a Thule roof box in which to carry t-shirts to give away along the route.

The Gold Rush Rally is a great mix of interstates, county highways and back roads. Spirited 300-400 mile jaunts between cities every day took us through every kind of terrain this great country has to offer:

Although we had yet to take the Alpha 10 Lambo to the dragstrip we pretty much knew we had this one in the bag. On its first ever run it netted us a 9.6 @ 143mph against a modified Ferrari F12 on a soft launch. Subsequent runs were 9.7’s at 143-144mph but with the track surface getting colder as the night went on we were unable to launch the car any harder. It was clear though a 9.5 in the quarter mile should easily be achievable and on pump gas none-the-less. We were happy with the 9.6 though as it was the quickest time of the event by a landslide!

Deals Gap On The Tail Of The Dragon With 1000HP

Tail of the Dragon is not typically the place you’d want to take a turbocharged Lamborghini. 318 turns over the course of 11 miles makes for a really technical course. Being the Gold Rush Rally we got the royal treatment as they shut down the road for us! Turn after turn the excellent throttle response and linear power-band made the car a blast to drive. Surely an experience I’ll never forget!

Tail of the Dragon, Tennesee

Again, when you roll with the GoldRush Rally it’s always a VIP experience. We were treated to another GoldRush exclusive of being on the mountain before it opened to the public. It was an amazing experience to drive up the same 12.42 mile course as the Pike Peak International Hill Climb. Although the roads were wet and there was snow toward the top, the Alpha 10 got a workout as she climbed the mountain with 156 turns to over 14,000 feet above sea level. Again the car ran perfectly without a hitch.

In Las Vegas, Nevada we were thrilled to hit the 2.3 mile Zmax Proving Grounds for a 3 session track day. The Alpha 10 Huracán didn’t miss a beat as it made lap after lap.

Running A Fig Newton Windshield Sticker Across The USA

Also worth noting is the fact that you can apparently drive across the country with a giant Fig Newtons decal across your windshield. This sticker somehow managed to survive 2 Police stops and tech at the dragstrip. We didn’t think we’d make it 5 miles from the start with it. The sticker was dangerous and inconvenient (not really, it was perforated) but we do love Fig Newtons!

The GoldRush Rally is truly an intense test of man and machine. Throughout the event the Alpha 10 Twin Turbo Lamborghini Huracán ran flawlessly logging more than 3000 miles on its journey. We hope to participate again in 2017 on Gold Rush Rally #9 with our Alpha stage 2 twin turbo Lamborghini Huracan perhaps sporting another 500HP and see how much better we can perform!

Special Thanks To The GoldRush Staff!

We had an AWESOME time on this years GoldRush Rally. Thank you so much to Ramin Arami, Aimee Shackelford, Jebo Lopez, Verone Pangilinan and the GoldRush staff for putting on an amazingly well run event. Everything went smooth despite the tremendous logistics involved to carry out such an ambitious event. We won the “Best Representation of the GoldRush Rally” award which was the icing on the cake but the friendship and camaraderie we experienced throughout the event is what stood out most.

Find out more at Drivewire