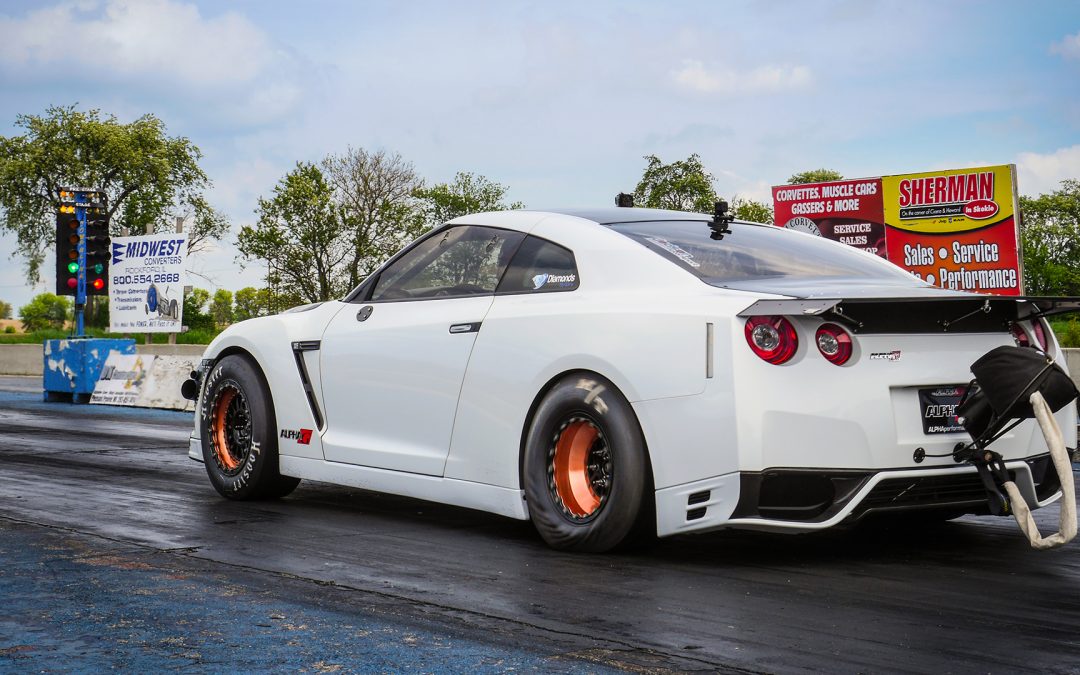 Things have been pretty busy here at AMS and while we would love to go out racing every weekend, we have to pick our battles carefully trying to balance it out with all of the engineering and shop work. With the Chicago weather finally cooperating thankfully we were able to make time for a track outing to do some testing of the new 2500whp capable ALPHA G R35 GT-R.

TX2K was a great season opener for the shop and specifically for Gidi’s Diamond’s by Wire ALPHA G R35 GT-R build. Having been completed less than 48 hours before its first trip down the strip we had very realistic expectations. While the car surprised us with a 7 second time-slip on its first full quarter mile pass at TX2k16, we knew that we needed time to analyze the data and slowly work our way up in terms of horsepower. With such a big gap in time between TX2K and the next big drag racing event, the Buschur shootout, another track outing was in order.

A Wet Start To The Testing Session

On Thursday May 26th we headed to our home track Great Lakes Dragaway in Union Grove Wisconsin. Unfortunately Mother Nature didn’t get the memo. For the first few hours the skies opened up and gave the track a good soaking. Thankfully the GLD crew was able to get us up and running in relatively short order.

Testing The Waters With ALPHA G

On this track outing the plan was simple… walk up power slowly and see how she reacted. Being a fresh build with only a few passes on it since completion and a car with so much power on tap, we made careful experimentation of how much power the track can take. The first handful of runs the AMS tuners worked diligently on collecting and analyzing data. Each time learning something new and fixing the next small issue the previous run had revealed. The crew constantly monitoring and making small chassis and suspension tweaks.

With a few tweaks it was time to throw some decent power at it. ALPHA G’s V2 Billet VR38 Engine Block and twin Garrett GTX turbos are good for over 70 PSI of boost but we wouldn’t be seeing that on this day. For now the boost level was set to 50psi, a little over 2000whp. The dragstrip staff had done a great job prepping the track but the thick humid air combined with a lack of traction, conditions would not allow for any record runs. Despite these roadblocks Gidi was still able to skate her down the track, sliding most of the way, to a 7.5@195mph. Not too shabby with a boat-load more power on the table and far less than ideal traction conditions.

Subsequent passes would prove that the late sun was unable to keep the necessary heat in the track and as such we had to call it a day. The testing was a big success however. We gained invaluable data across the board which will only make our next outing that much more successful. The trick now is to get the right conditions to unleash the 2500whp on tap!

Next on the schedule is the Shift S3ctor Pikes Peak Airstrip Attack and ½ mile event. There Gidi and ALPHA G hope to put down a respectable time in front of a very large crowd.