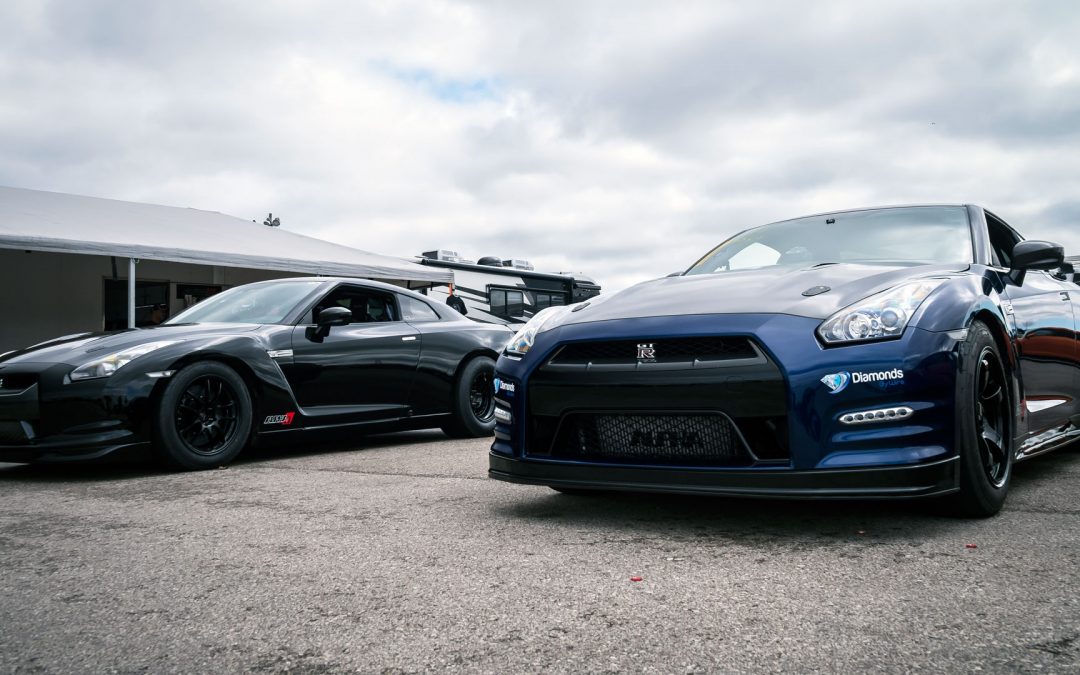 Few races during the year command your attention like that of the TX2K last weekend. An event, that like the name, would imply how it started in 2000 as a small Supra gathering, has grown to an event of epic proportions! Companies and fans spend all year preparing for this 4 day festival of speed. 2015 was no different for the AMS/ALPHA camp. With competition always stepping up and technology perpetually advancing, we knew we had to bring our A game. This year we brought our shop GT-R ALPHA OMEGA as well as the very first OMEGA clone owned by Gideon Chamdi  the Diamonds by Wire ALPHA 20 GT-R. Both cars were finished within just 48 hours of the event! 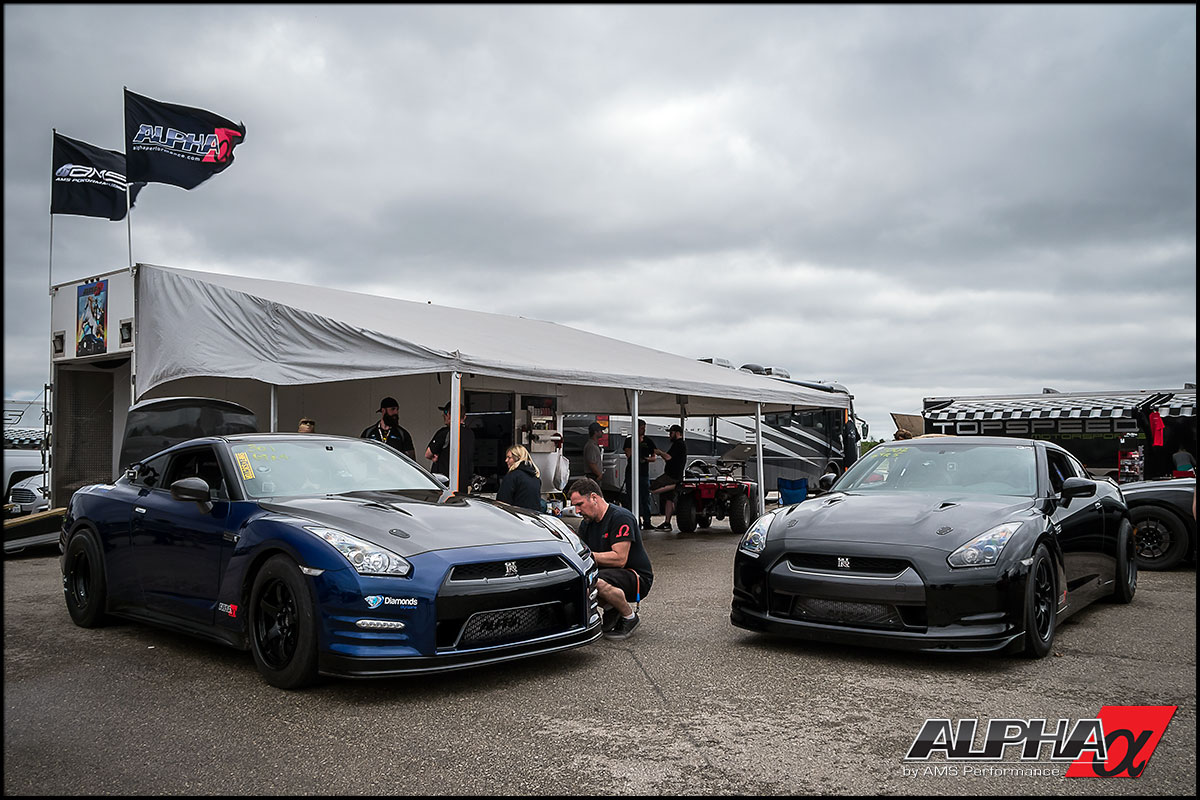 The four day event kicked off with two days of roll racing. The rules require two cars pace within half a car length of each other to approximately 65mph. Once these two cars cross a marked start line, they go all out until they reach a finish line roughly 1500ft down the track. Whoever reaches the line first is deemed the winner of that matchup. Seems simple enough, but getting two high horsepower cars lined up while trying to get a good clean hit at the start line proved very difficult. During Thursdays speed indexing passes, this distance didnt make much of a difference. We chose to focus on Gidis ALPHA 20 for the roll race – sitting Omega out of competition until the drag event on Sat/Sun. Despite some new build teething issues, Gidi managed to put down a very respectable medium boost run of 194mph. With Thursday in the teams rearview mirror, we focused on Fridays elimination event.

Friday brought out the big guns! Several 1800+ HP GT-Rs and Lamborghinis showed up ready to battle it out in the roll race. To make sure Omega wasnt suffering the same teething issues as Gidis Alpha 20, driver Ivan Phipps and tuner/president of AMS Performance Martin Musial decided it would make sense to take Omega out on a moderate boost test pass during the roll race event. It was a clean run with Omega posting a 197mph trap speednot too shabby.

With the actual competition starting Gidis GT-R was ready to roll. His first challenger was fellow ALPHA Elite member Asier Torres for round one. Asiers ALPHA 16 and Gidis ALPHA 20 took to the lanes. Deemed an uneven start, the two competitors were forced to rerun their race and it resulted in quite the run. Gidis ALPHA 20 proved to be a bit too much for the powerful ALPHA 16. 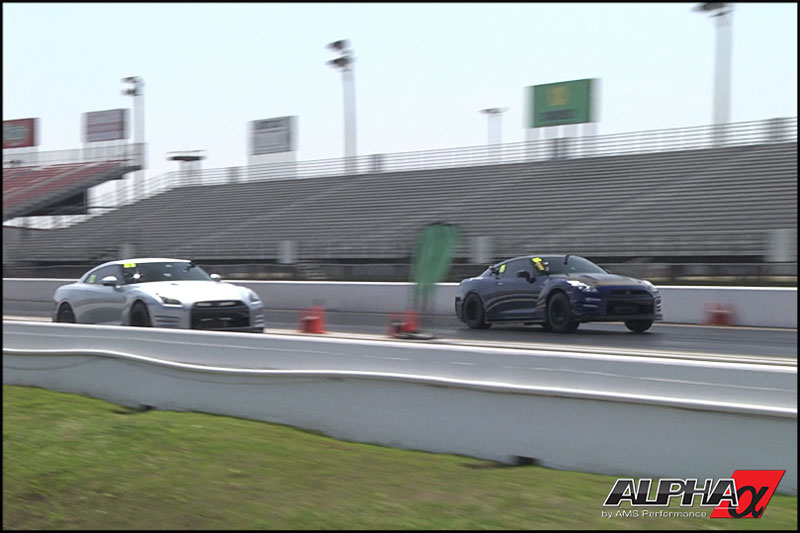 Gidi moved one to round two where he would face the English Racing (ER) tuned ETS 2000HP shop GT-R driven by Lucas English. Again, with what was deemed an uneven start the competitors were forced to do a rerun. On the rerun Gidi was able to come out very strong and hold off the very fast ETS GT-R taking the win and moving on to round three. 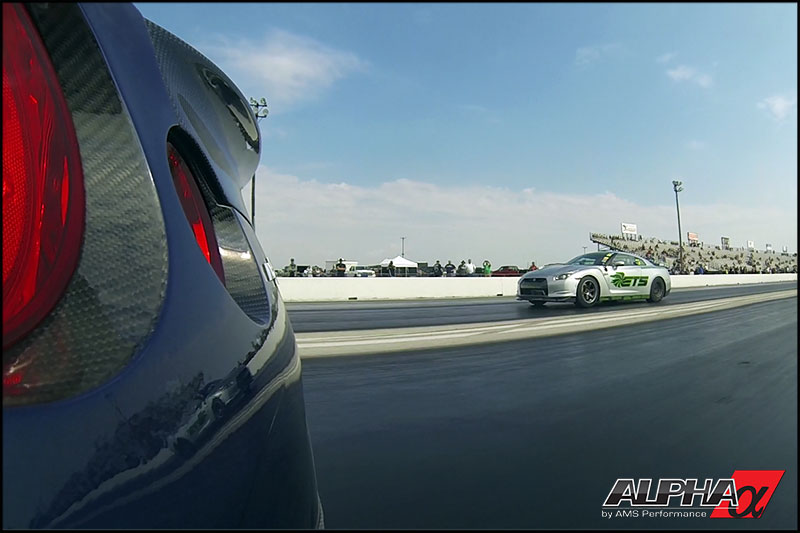 The third round brought another worthy competitor; a very powerful Supra from the team at Real Street. This same Supra in the two previous rounds eliminated not one but two Underground Racing (UGR) stage 2R Lamborghini Gallardos. Knowing he had is work cut out for him, the Supra went all out on what power it had against Gidi, but the RWD Toyota could not put the power down and had to abort the run giving Gidis ALPHA 20 a birth into the finals. 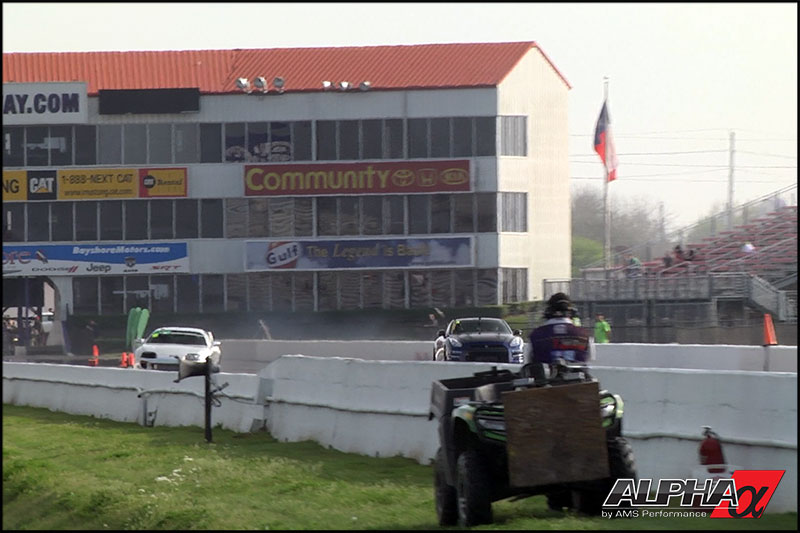 Semi-final round. Real Street Supra vs Gidi’s Alpha 20 in which the Supra loses traction, swerves and lets off 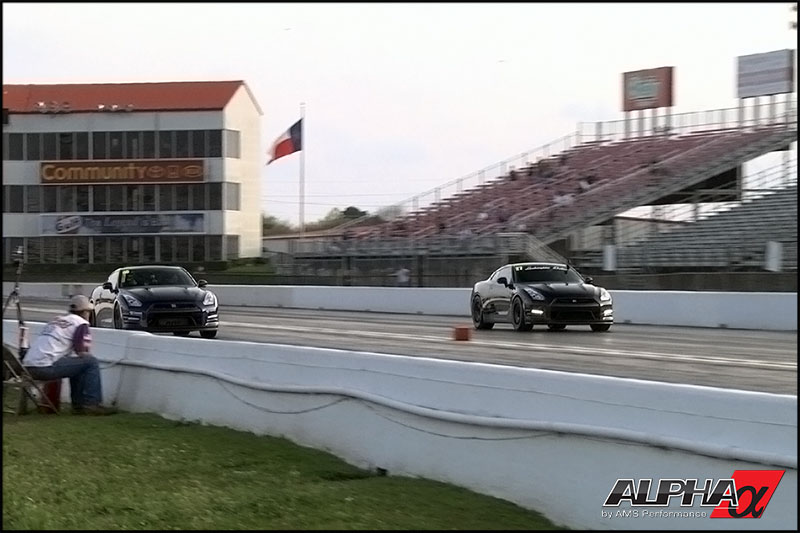 After hot lapping twice, the third rerun of the final results in an even start between Gidi’s Alpha 20 and the LLR GT-R

In the finals another very fast GT-R awaited from the team at Lease Locators Racing (LLR). Their team campaigns two GT-R’s and Gidi was to line up with the English Racing built and tuned LLR GTR2 also known as Black Beauty. Gidi and his powerful ALPHA 20 was able to beat the Black LLR GT-R2 car to the finish line twice but because Gidi’s start speed was lower than the allowed 60mph threshold the runs were deemed invalid. The day was coming to an end and with the event having gone over schedule, the two competitors were forced to run the cars a THIRD time in less than a 25 minute window. With a piping hot transmission, the two competitors set out for their last run – getting a very even start this time around. Unfortunately for Gidi, the super-heated transmission slow shifted each gear change allowing his competitor to gain ground on every shift. Even though he crossed the line 1mph faster than the LLR GTR, he was edged out at the stripe and took the runner up spot at the TX2K roll race event.

Rain pounded the track all day Saturday canceling all drag events for the day. Our AMS/ALPHA Team would have to wait for Sunday to test their hardware on the drag strip. Gidis ALPHA 20 fresh off two full days of near 200mph passes was ready to put the slicks on and see what the strip would produce. One of the weekends goals was to get Gidi his first 7 second runsomething few GT-Rs have experienced. Omega would also have to wait for the track to go hot and try its hand at bettering its previous best of 7.700 and 190mph drag strip stats.

On and off overcast skies prolonged the track from getting to temperature. Despite that the AMS/ALPHA team decided to do some shakedown runs with both cars to make sure they were performing well. Gidis low boost passes in his ALPHA 20 went over very well. The team was confident they would get Gidi his first 7 second pass. Omega however was not going as smoothly. On its last outing the team benefited from some very good weather and track conditions which helped Omega cut very favorable sixty foot times in the 1.25 and 1.26 range. This day was not as favorable for the team as the short times were less than ideal in the 1.4 range. Omega was able to put down a moderate boost pass of 7.95@185mph but was unable to get a clean run at full power.

Gidis ALPHA 20 GT-R was showing good signs for some memorable runs. Gidi set out for a test pass and the car left the line very well. The team knew it was going to be the runthe board lit up 7.94@180mph!!! Gidi got his 7 making him the first customer owned GT-R in the 7’s!

The day was off to a great start but far from over as Gidi still had to compete in the drag eliminations. Gidis car was entered in GT-R 4the highest elimination class in the event. GT-R 4 contained some serious heavy hitters with the likes of the White LLR GTR, TSM ALPHA 16 and other big R35 players. Populated with GT-Rs making north of 1500whp in a heads up drag race we knew anything could happen. Gidi moved through the rounds with the skill and demeanor of a veteran drag racer. When the dust settled he was in the finals against none other than the Top Speed Motorsports ALPHA 16 driven by shop owner and ALPHA Elite member Nathan Cicio. This TSM built and tuned ALPHA 16 became the first A16 in history to break into the 7s with a seriously impressive 7.997@174mph. 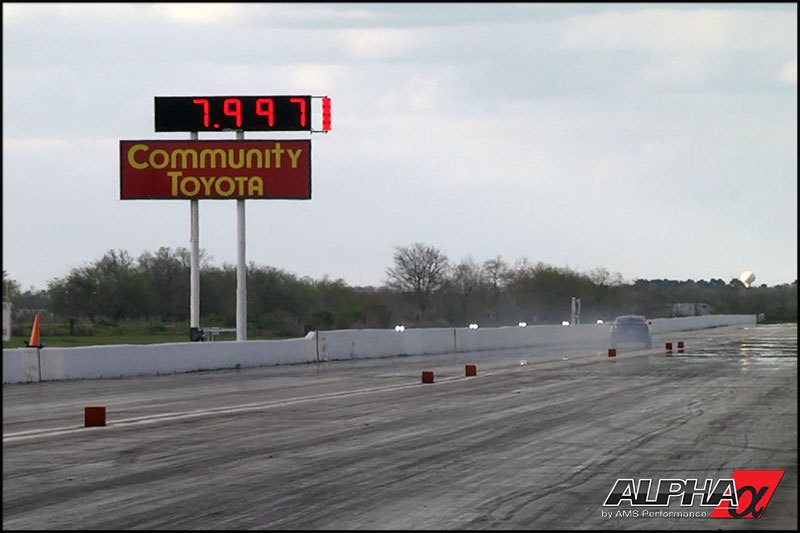 With 2 days of racing packed into one, the sun had long since set and the track had gone quite cold for the final race. Gidi out powered the strong TSM ALPHA 16 but traction was going to be a serious issue now. The two cars left the line nearly simultaneously. Gidi’s ALPHA 20 stretched out to a healthy lead but had to lift out of the throttle near the top of the track to avoid a very nasty spin out. Still he was able to cross the stripe for a victory! 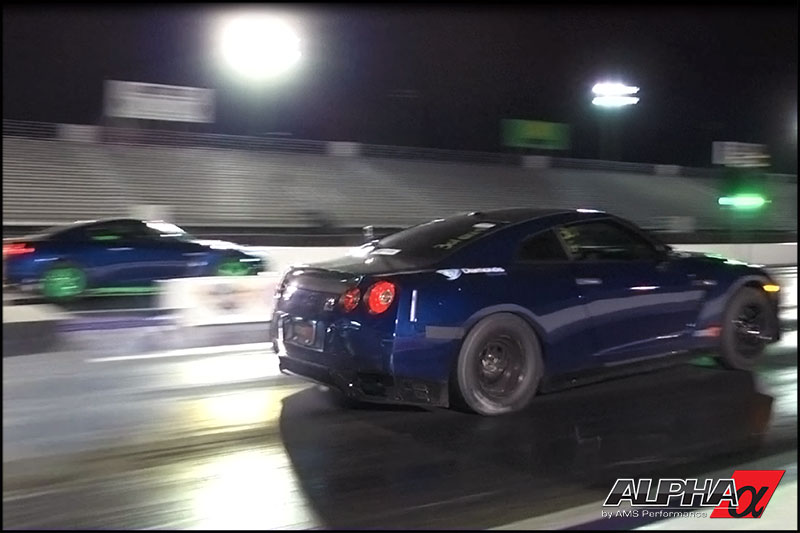 A dead even start in the GT-R 4 Class drag finals between Top Speed Motorsports Alpha 16 and the Diamonds by Wire Alpha 20 GT-R. 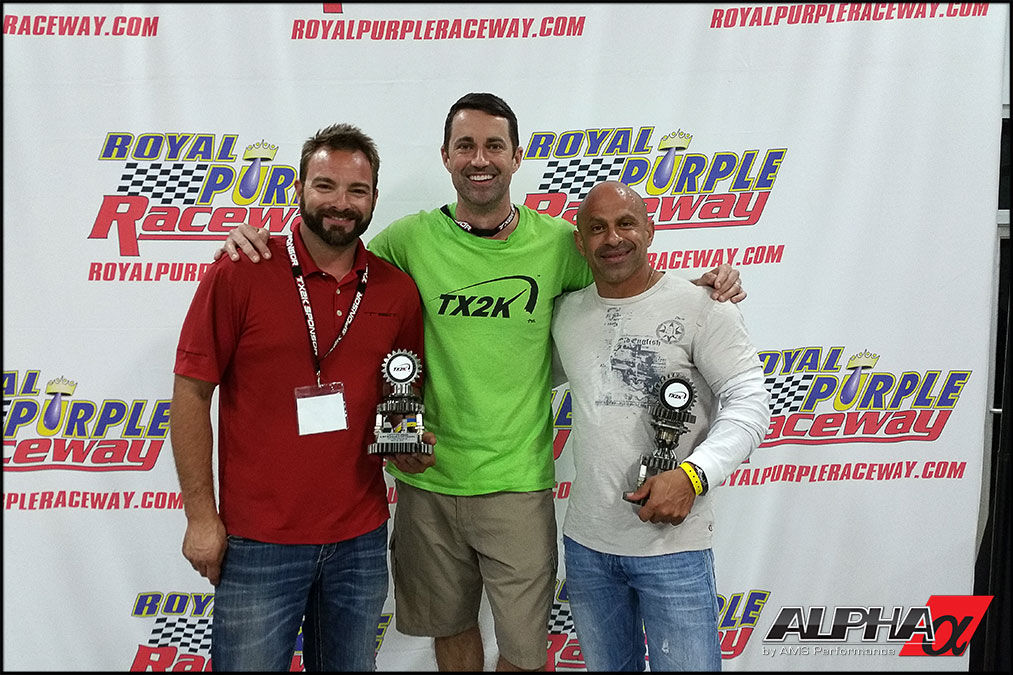 A Great Showing For The ALPHA Team And Family

The team got to celebrate in not one but two of their friends/customers breaking into the 7s for the first time. Gidis very impressive ALPHA 20 was run ragged for three straight days and almost made a clean sweep of the entire event. Both Omega and Gidi put several new parts to the test such as the new ALPHA Carbon Fiber Intake Manifold, Omega Brushless Fuel System, ALPHA VR38 Billet Engine Girdle (Gidi) and VR38 Billet Engine Block (Omega).

The team also got to witness some fantastic performances by cars adorning the ALPHA logo. ALPHA Elite member Brian “Unabomber” Spachmans TSM Built ALPHA 12 managed to take the Super Sport victory in the roll race competition. Countless other ALPHA powered cars made pass after pass after pass showing the reliability and fortitude of the ALPHA catalog. 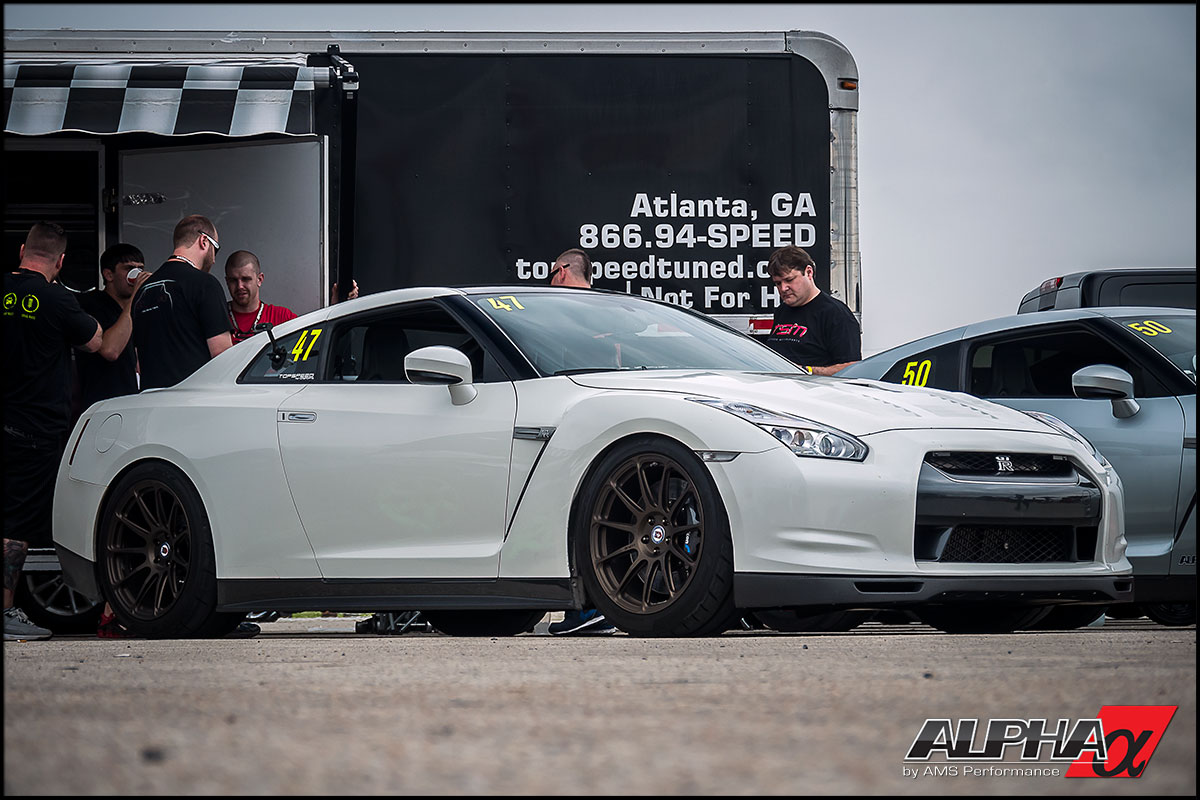 Another TX2K In The Books

All in all the event was a success for our AMS/ALPHA team. Four GT-Rs ran 7 second passes and three of them were built by AMS or were running AMS/ALPHA hardware. It was a long 4 days but rest is for the weak! The team has an even greater obstacle ahead as Gidis ALPHA 20 and the reigning King of the Streets ALPHA OMEGA head back to Texas in just three short weeks to defend their crown at the Texas Speed Syndicate Texas Invitational (TI).