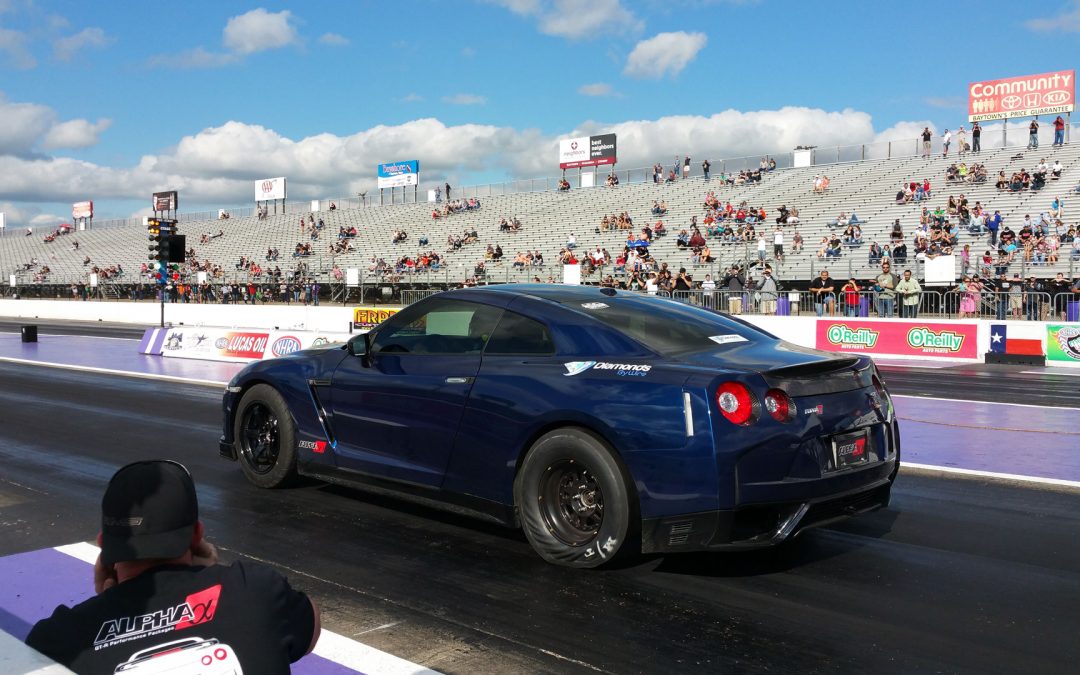 The Diamonds by Wire Alpha 20 GT-R, owned and driven by Gideon Chamdi, made its first appearance at the TX2K15 event last weekend. Finished only hours before its scheduled departure for the event from AMS Performance, in West Chicago, IL, it was uncertain how well the new Alpha Omega clone would perform with no previous track time.

A Weekend Of Abuse Testing And Proving New ALPHA Components

The goal of ours, of course was to win, but to also continue testing the Alpha Carbon Fiber Intake Manifold, Omega Brushless Fuel System as well as a prototype Alpha VR38 Billet Engine Girdle. Throughout the course of the TX2K15 weekend, Gideon completed 14 full roll race passes attributed in part to a number of re-runs (not to mention 7 full drag passes) taking the runner up position in the roll race event. A substantial amount of abuse for a 2000+ horsepower R35 GT-R!

Upon closing ceremonies on Sunday evening, Gideon and his Alpha 20 managed to take home 1st place in the GT-R 4 Class Drag Event.  A victory that went to one of the most passionate competitor in the game.

In addition to their runner up in the GT-R 4 division win this year, Top Speed Motorsports (TSM) also made an impressive showing joining the elite few who have broken the 7 second barrier.  Their TSM built Alpha 16 powered GT-R blasted into the record books with a 7.99 pass.

Another Successful TX2K In The Books

Overall it was a great weekend with a spirit of friendly competition.  Gidi and his Alpha 20 did battle with some impressive competitors such as the Extreme Turbo Systems (ETS)/English Racing (ER) 2000HP shop GTR, Lease Locators Racing (LLR) GTRs, the Real Street Supra, Asier Torres with his Alpha 16 powered GTR and T1 Race Development among others.