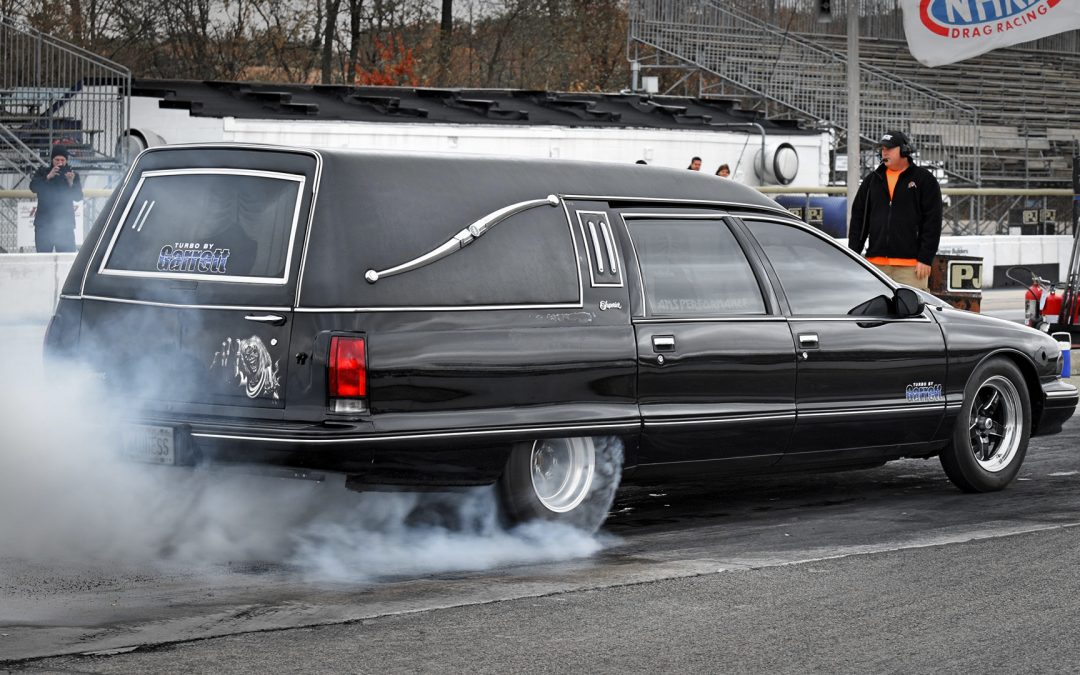 A tribute to his favorite Heavy Metal band Iron Maiden, “Madness”, is the creation of AMS Vice President Arne Toman.  Wanting a more mainstream world record, he sought to build the World’s Fastest Hearse.   In 2012, he realized his dreams when the Hearse broke the record on its first outing.  Since then he has been knocking down the 10 second and 9 second barriers in the quarter mile.  Not bad for a legitimate, fully-functioning Hearse.

The last time he ran Madness in 2013, he ended up with a 9.94@137mph time (a new record at the time) on the stock GM 6.0L LQ4 engine running a modified Borg Warner turbo.  “We knew we were pushing our luck seeing 23-25psi of boost and 1000HP from a stock iron LS engine so we figured it was time to upgrade.  We did WAY more than we expected on that combination seeing the Hearse weighs over 5000lbs.” stated Toman

A new forged 6.0L LQ4 engine built by AES in Elk Grove IL. was installed as the foundation.  The transmission was freshened up by Andy’s Performance Transmission. A new differential center section, gear and axle combination from Strange Engineering was fitted to handle the extra power the Garrett GTW Turbos were going to belt out.

“With AMS being a Garrett Performance Distributor we have access to all of the newest offerings.  We figured this would be the perfect opportunity to put their new GTW series to the test.  The whole turbo system was rebuilt from the ground up utilizing the 2 new Garrett GTW 3884R 67mm turbos.  These new offerings from Garrett offer improved flow characteristics at a lower cost compared to the GTX line. On a modest 25psi of boost the car now makes about 1300HP at the crank with room for much more.”

The plan for this latest track outing was to test out a new launch strategy and shake down the new Garrett GTW Turbo combination.  “We certainly didn’t intent to break the record again by this much on the first outing.  The car has more power on tap but we are saving that for a visit from the Guinness Book of World Records next Spring”

Project Manager and Head Technician behind Madness, Lance Cain, piloted the car refining the launch strategy.  With a solid base map for the boost controller and a stepped approach they saw the Hearse getting faster and faster with ease.  Lance ended up with a best time of 9.54 @ 146mph with an easy 1.57 60′ time.  This was then backed up when Arne jumped behind the wheel for the first time in 2 years, turning out a 9.60 @ 145mph.

According to Toman, in the past the Hearse has managed 1.45 second 60′ times so it seems that a low 9’s @150mph+ is achievable.  “Stay tuned for 2016 when we truly unleash the potential of the new Garrett GTW turbos and work our way even closer to the 8’s.”

For more information about Madness and other videos visit: