Alpha Omega Is Crowned the new T.I. King of the Streets!! 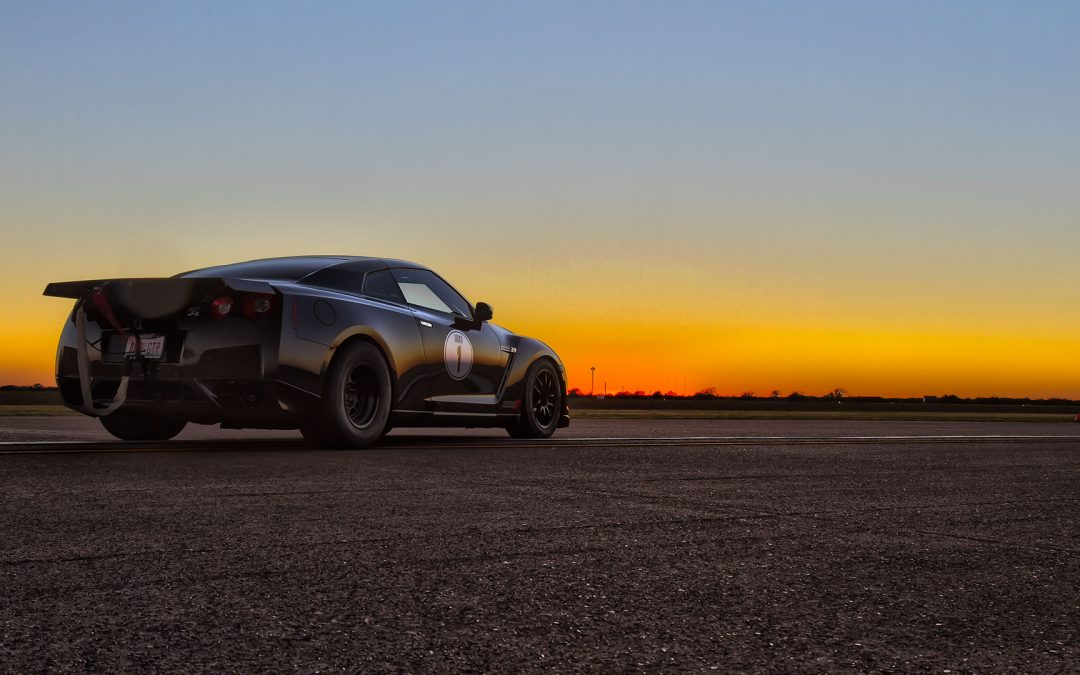 The Fall 2014 Texas Invitational (TI) hosted by the Texas Speed Syndicate, proved to be a historic event for the GT-R community. This invitation only event brought out the big name performance shops armed with the fastest street cars in the world all converging to one small airport in north Texas to do battle, the stage was set for another epic TI showdown.

Although the GT-R does many things well, this particular event has been dominated by the twin turbo Lamborghini Gallardos with their mid-engine 5.2L V10, AWD system and more than 2,000HP on tap!  A deadly combo for roll racing. A twin turbo Lamborghini V-10 powered vehicle has claimed most of the Texas Invitational wins. Fresh off our recent trip to the drag strip where ALPHA OMEGA exceeded 190mph in the ¼ mile, the team from AMS was Texas bound to toss their hat into the ring.

Friday was a laid back affair consisting of warm ups, grudge racing and speed indexing (qualifying) to set the bracket for the single elimination King of the Street event taking place Saturday. In order to index, a car must maintain 60mph in a radar enforced pacing zone until the light goes green, otherwise the run is not counted. Once the green light flashes, a car has approx. 1,500ft to accelerate to the flags and the MPH is logged.

On a modest power setting the first time down the track, Ivan crossed the flags at 190.8mph placing Omega in the top 10 speed indexes for the day. Comfortable with that run we decided to wait for final indexing on Saturday.

Saturday morning we decided it was time to turn Omega up to a comfortable, but higher boost setting. As Omega left the starting box on the rolling anti-lag she leapt forward like no other car at the event. Omega crossed the flags and when the board lit up the crowd cheered, Ivan posted a blistering 204.32mph pass, the fastest MPH of the event! The team knew they had the horsepower to win after watching the TI2000 dig competition (a longer 2000 speed competition from a standing start) that day. Only three cars hit 200.XXmph from a dig and Omega was trapping higher from a roll even with a shorter area to accelerate.

Saturday afternoon was the main event, the King of the Street competition. 42 cars indexed and Omegas first round challenger would be an 1,100+hp Supra. Ivan quickly jumped out to a large lead and carried it through the flags to take the first round win. Round two paired Omega up against the blue OB Prestige/Heffner Performance 2000HP twin turbo Gallardo. Both cars launched hard and Omega pulled away for the victory running a 194.46MPH to the Gallardos 188.28 MPH. In round three Ivan faced a twin turbo Viper, both cars launched equal and hard but the powerful RWD Viper couldnt put the power down like the AWD Omega.

Round four, five and six would prove not just how fast Omega is, but the reliability of the car at insane power levels. Round four had Omega doing battle with an Underground Racing Gallardo rumored to have 2000HP. When the light went green both cars stabbed the throttle and Omega jumped out to a good lead holding it all the way through the flags running 197.02 MPH to the Gallardos 181.74.

This win put Omega up against another Underground Racing Gallardo in the semifinals. This is the same twin turbo Gallardo that ran a very impressive 219 MPH half mile at the recent WannaGoFast event in Georgia. As the two cars rolled into the box the Gallardo hit a perfect light an jumped out in front of Omega but almost immediately Ivan started reeling the Lambo in and by the time the two cars crossed the line the GT-R was over a car length ahead to take the win running a mind-bending speed of 201.07 MPH to the Lambos 195.31, eliminating all Lamborghinis from competition.

The final battle would put Omega up against the beautiful Nth Moto twin turbo viper. As the two cars rolled out the crowd was silent, the light turned green and they punched the accelerator at the exact same time, nobody could have asked for a better start! Both Omega and the Viper stayed side by side for a moment, then Omega started to pull away crossing the flags at 201.43 MPH to the Vipers 192.30. Omega is the new King of the Streets!

Other Alpha equipped GT-Rs at the event were impressive as well. Tony Palos T1 GTR with Alpha 20 power ran a best MPH of 198. T1 customer Shin made it through 3 rounds of King of the Streets, he also eliminated the Underground Racing Gallardo that won the 6 speed challenge in his Alpha 20 powered GT-R!

All of us at AMS/Alpha Performance would like to thank the Texas Speed Syndicate for hosting an amazing event. We have a great time when we come down to compete and look forward to many more high speed shootouts in the future!