It was a clean sweep for the Evo at Super Lap Battle 08 in Buttonwillow!!!

Ryan and Martin did an incredible job driving and both ended up with podium finishes!!!

Martin ran the quickest time for our class (and of the entire event) in qualifying and secured the #1 spot running a 1:56.658. After qualifying, I checked tire pressure and left the valve stem caps off. Unfortunately, this was a costly mistake on my part. The valve stem cores were not tightened properly when the tires were mounted and the tires slowly deflated during the break between rounds. Just before the first timed session, I checked pressures and found the tires to be extremely low. I made a mad dash to air up the tires before the session and but had no reference as to what “warm” tire pressures should be. I guessed wrong and after the first session, Martin came in complaining of huge understeer. Checking hot pressures, I found the fronts to be 4 psi less than what we were shooting for. Martin ended up placing 4th in the first round.

Second round I had the tire pressures where they needed to be and Martin went out and drove like a champ. Unfortunately the track conditions were getting bad. Someone had engine problems and dumped oil and / or coolant all over the track, another car went off track and then dragged sand and dirt back on track causing others to spin in the same corner and drag more sand and dirt on the track. Second session times were slower than first session times overall, but Martin ended up running the quickest time of our group just like during the qualifying session.

Third round was do or die time. The tires were practically worn out and we did not have any spares. I swapped the rears to the front and did quick tow change in the rear to help loosen the car up a bit. Jason Aquino made some recommendations on some dampening changes after watching some in car video of the last session. We also did a small wing angle change. I got the tire pressures set and Martin went out for the last session. The changes helped loosen the car up. After a hot lap, Martin came in the hot pits for a tire pressure check and adjustment and had us set the wing back to where we had it. Martin (for the third time of the day) ran the quickest time for our group. The final session netted us our best official time for the event and landed us in third place with a 1:57.067.

I am disappointed that I missed the setup in the first session when the track was good. I am confident that Martin could have run the best time of that session after seeing him do it in every other session. That is racing though. Lesson learned. No excuses. Nils and Ryan did a better job than us.

Mad respect to Martin who drove like a champ and battled a missed setup and failing track conditions to place third in the event with a 1:57.067

I am personally super proud of Martin and Ryan and and psyched about how well the two of them did with the new Evo X. Both cars are still very heavy compared to the competition (about 3400# with driver) and both cars are sporting new setups that are still getting the bugs worked out.

Thank you to NOS Energy Drink their support and the drinks that kept us awake and focused, BF Goodrich Tires for tire support, APR for a wing at the last min, Seibon for the lightweight carbon hood and trunk, Frank and Brian at JRZ for the suspension and trackside support, Exedy for a clutch that takes the abuse and of course Mitsubishi for building an incredible car!!

Thanks to Source Interlink Media for putting on a great event.

Special thanks to Jason Aquino for his help and recommendations on the setup. 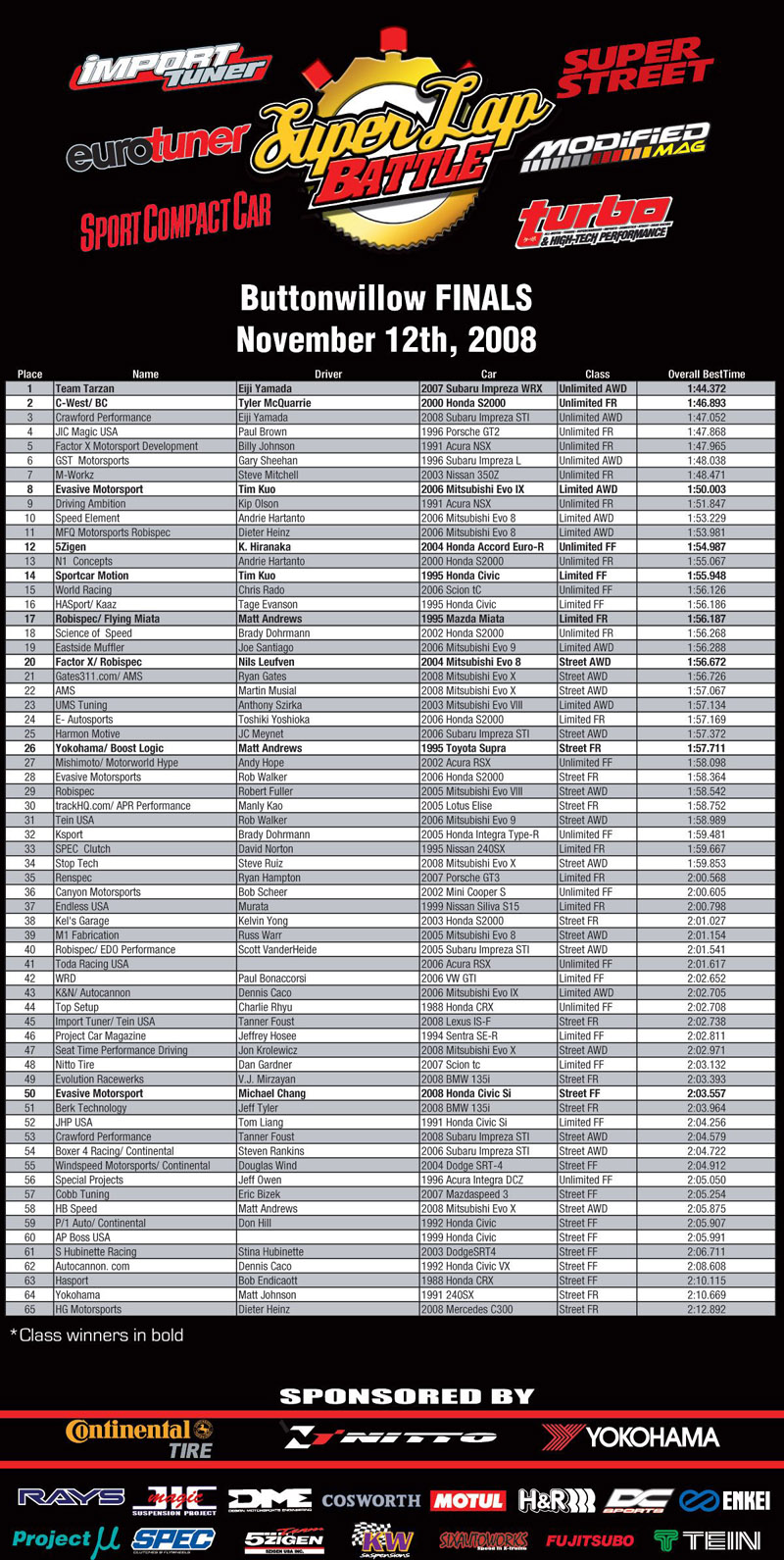