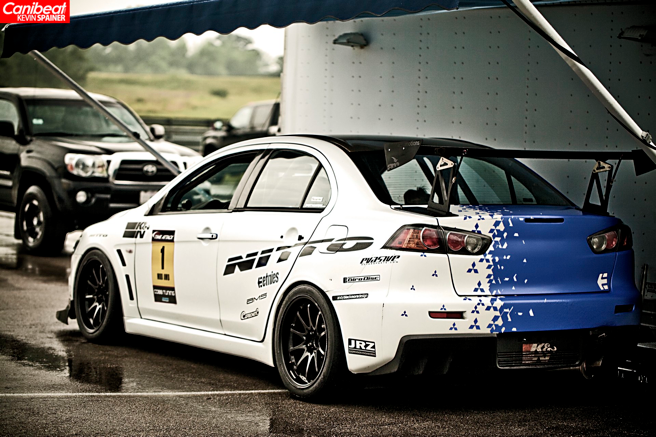 Finally, the Gates311. com / Nitto Tires Evo X made its 2010 track debut! With a completely new setup, weve all be curious to see how itd stack up to all the new competition in Modified class for 2010. Despite some issues, the car still performed awesome….we debuted with a 2nd place finish at Autobahn, not 1st place but theres plenty of positive things that came out of the event. Cobb Tuning took 1st in their nasty widebody GT-R, about 7/10ths of a second ahead, congrats to them! We both beat my previous lap record with 1:28s. 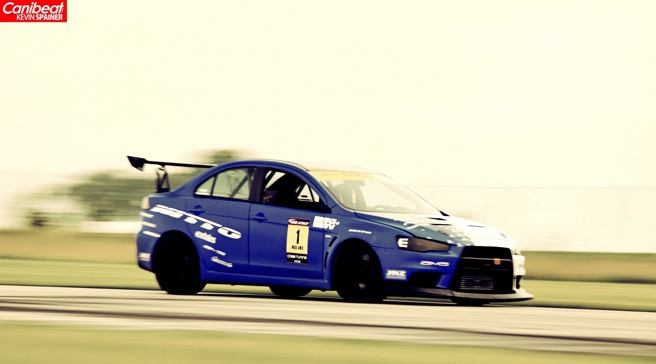 The 2nd place is a little hard to take when you look back to 2009, but that GT-R is no joke! With our car running about 80% during the Autobahn Time Attack due to a failing OEM coil pack and a destroyed splitter, its good to know were right with them despite the issues. Looking forward, weve got ALOT more for them at Willow Springs on July 2-4th for Redline Time Attacks Round 6.

The new AMS 2.2L race engine performed flawlessly at Autobahn, taking so much abuse without any hiccups. Its great to have the engine back to good, well almost. Weve been running the OEM coilpacks on the car since day one, and theyve been great but are finally starting to fail causing the car to misfire a bit under boost. A quick swap with some new ones fixed that issue, but unfortunately for us the 2nd T/A session at Autobahn was cancelled due to rain. I guess people will have to wait to see what all 750whp looks like haha…. 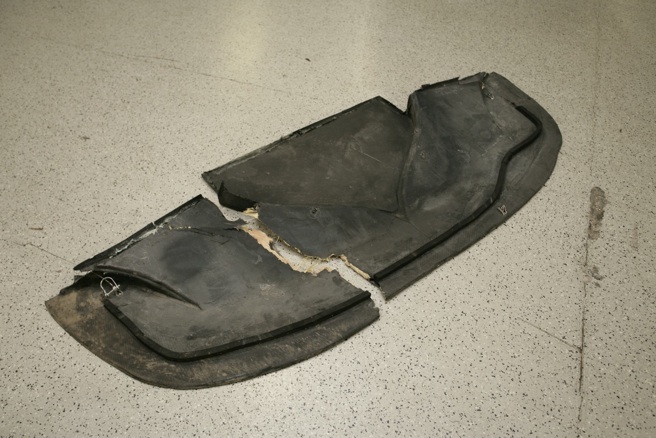 Heres a look at the broken splitter I mentioned earlier. While testing the car on Friday before the event, I ran a bit wide and tagged a rumble strip on the outside of Turn 3, this normally wouldnt be an issue but a pothole placed in a prime location just before the rumblestip caused the front end to dip down just enough to clip the cement of the rumblestrip. The hit ripped and pulled the splitter off the car with so much force that the front fender was actually pulled back from its mounting point! The splitter is a huge part in the way this car is setup, and without it we struggled the next two days to get the car to drive well. With a final change before the 2nd T/A session on Sunday, we were all confident that the car was ready to rock, but that rain! Oh well. 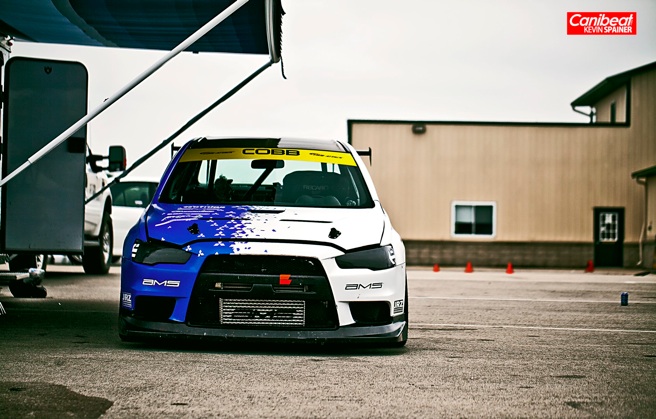 You can see the blue side fender is a little whack in this photo, its even worse once the hood is closed. New fenders, bumper and a front lip are on the way! The car is going to show up at Willow Springs like a brand new car, which Im super pumped about. When things get a little ratty its hard to get motivated, but thanks to my sponsors the car is getting back to 110%….about time haha! 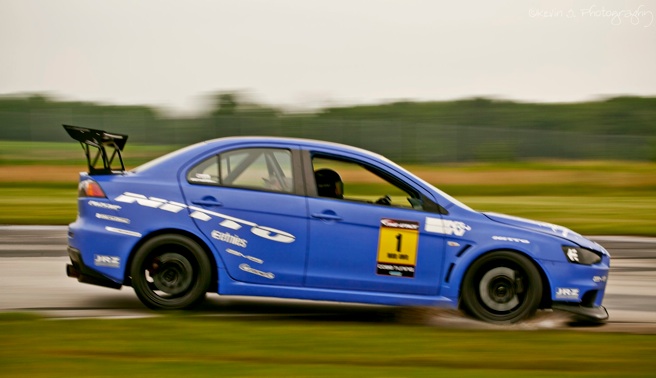 The track was very inconsistent throughout the entire weekend, making chassis setup that much harder. The car is never ran without the splitter, so when that ripped off we knew things would need to be completely changed. Toe changes in the rear, shock adjustments on the JRZs at all corners, wing angle changes, lowered front ride height, and more were all done while chasing the setup. Its pretty crazy how well a proper splitter works, so thankfully weve got another on the way just in time for Big Willow on the 4th! 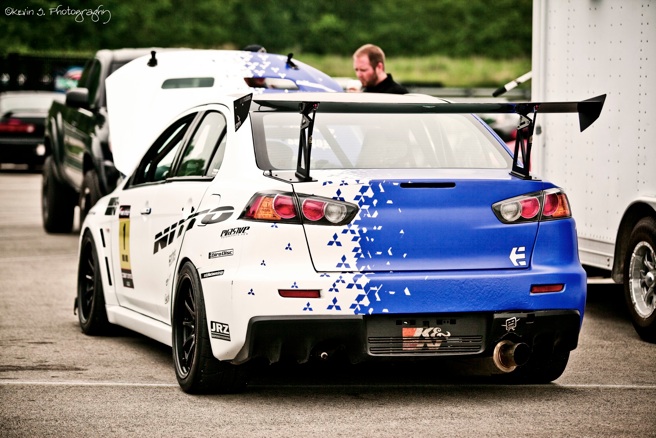 This shot is pre wing adjustments, you can see the nice angle we had dialed in to balance the car with the splitter. Without it, we ran the wing almost completely flat, and even then the car was still understeering at high speeds….gotta love a real efficient wing (Aeromotions)! 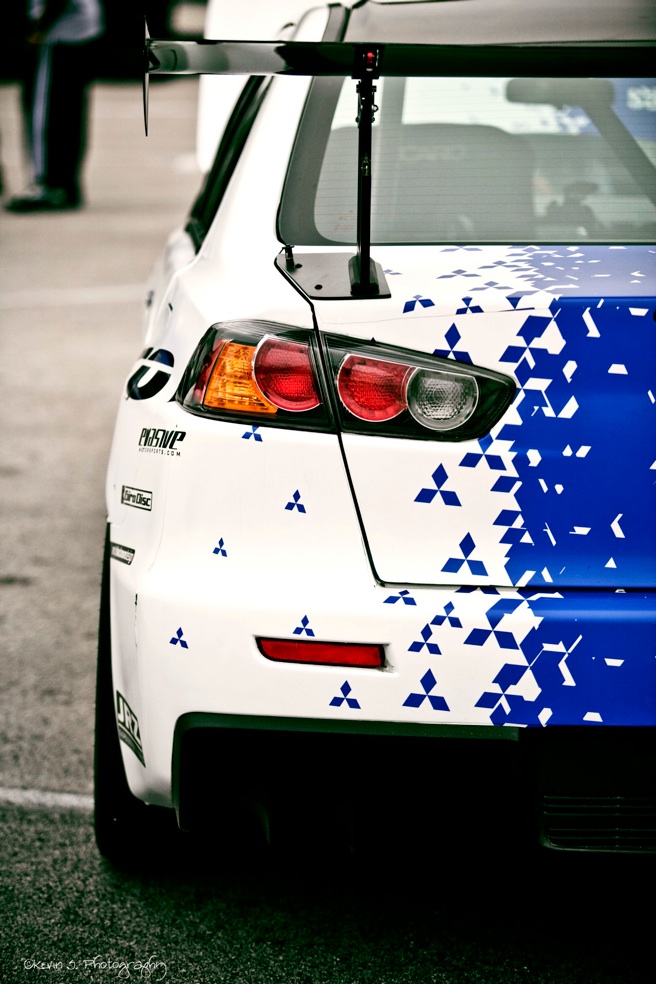 Close up on the wrap….the detail Andy Blackmore laid into this livery still amazes me. Its simple and clean on each side, but the Mitsu emblem split is done just right to split the car. For the real detailed people, youll notice the blue Mitsu emblems in the rear and the white Mitsu emblems up front. Asymmetrical liveries are always cool in my book, glad to finally sport my own! 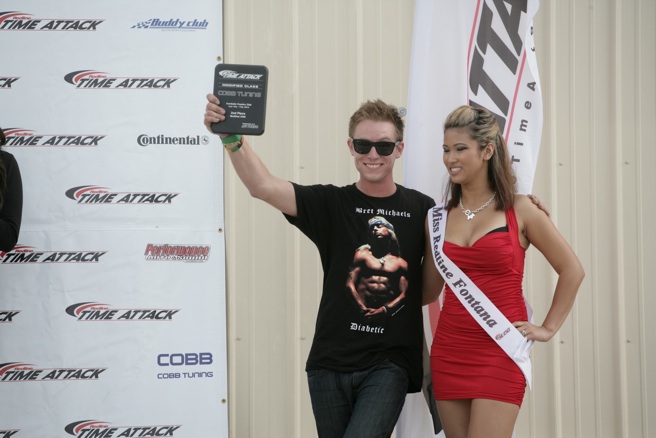 You can see how pumped I am with the 2nd place finish! Soon enough things will be back to where they should be, no doubt in my mind. Willow Springs should be a great event, especially with some key changes to the car with this track specifically in mind. All Star Bash is also running that weekend over on Streets of Willow, so come out and hang with some Time Attacker as well as the Drifters over on Streets! See you out there!