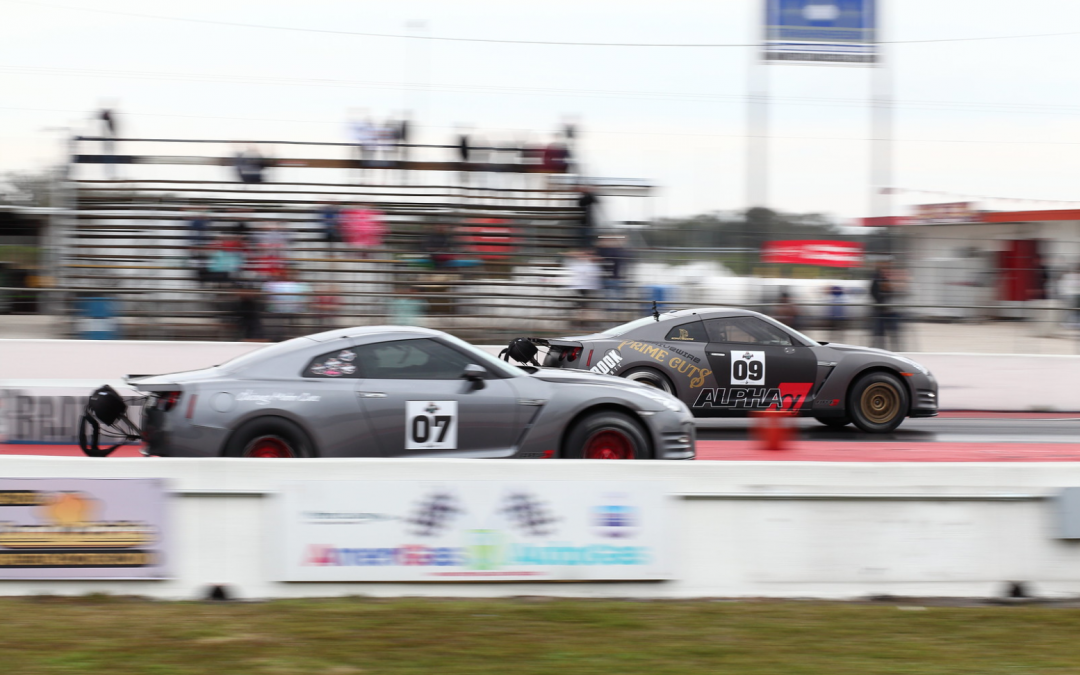 Hard work; That was the theme of AMS’ GTR World Cup 2020. The Outlaw and Pro-Street class wins and the Stock and 68mm Turbo records did not come easy. The AMS crew worked long hard hours at the shop getting the five cars ready leading up to GTR World Cup. They then put in even longer hours at the track fixing and maintaining the cars late into the night. Our customers’ cars did not miss a beat. We brought five cars ready to compete to the event and every one of them performed. The Technicians and Tuners had the cars ready and at the starting line for qualifying and elimination rounds. Because of all of the their blood, sweat, and sometimes tears, Team AMS brought home two 1st place finishes and would have come home with a third #1 finisher out of 6 classes but Brooke Berini’s GT-R went too fast!

“I just cant thank the AMS Team enough for all of the hard work and extra hours they put in so thank you.” – Brooke Berini – Stock turbo record holder

Brooke’s car was a really fun build. We worked with Brooke to get everything you can out of stock NISMO turbos. We put our heads together and came up with a great plan and put that plan into action. On our dyno we were shocked how much power we could make with the stock turbos. At the track Brooke backed up the dyno numbers by running 9.0’s at 149mph securing a #1 spot in the qualifying rounds. On elimination day the DA was better and the car got faster, too fast in fact.

Brooke set the 1/8th mile trap speed breakout during the qualifying rounds, blowing the 115mph breakout and setting a new one at 119.XX mph. With the better air came more horsepower and higher 1/8th mile trap speeds. She ran a 8.9 sec run in eliminations but that was 0.07mph over the 2% limit. She ran again after the event and backed it up with another 8.90 this time at 151mph! You can see this awesome build in person at the next event, TX2K20, in March.

“The car worked beautifully all weekend, reset the record book, and took the win. I couldn’t ask for anything more.” – David Rohrshneider – 1st Place Pro-Street Class

David Rohrschneider knows all about setting records and finishing first in his class. Last year Dave competed in the 58mm class in his Alpha 10X GTR “Wally,” named in memory of his father, set then reset the 58 mm record, and finished in the top of his class at TX2K19. Dave was back but this time he was stepping up to race in the 68mm Pro-Street class at GTR World Cup with “Wally” now upgraded to a new Alpha X turbo kit capable of over 2100 WHP. The car ran flawlessly in qualifying and eliminations. No issues besides basic maintenance.  We did have to worry about break out trap speeds as we were right on the cusp of the 159.99 mph 1/8th mile rule. In eliminations David had to pedal the car and ease off before the 1/8th to prevent from going too fast which led to some interesting racing! True to David’s modus operandi he became the #1 qualifier, set then reset the 68mm record, and ended up winning his class with a best run of 7.06 @ 204mph! The pre event testing and tuning the month prior to the event at Bradenton Motorsports Park is what made all the difference.

We traveled to Florida in December to test the new Alpha X turbo kit and to get the Alpha Drag race suspension and tuning dialed in. David’s GTR ran consistent high 1.1’s 60’s with good track prep on a 10.5″ tire. We knew we had another best in class turbo kit on our hands. The guys designing these kits at AMS are the best in the world as the results speak for themselves. All of our kits from the Alpha 10X to the new Alpha 22X, coming soon, are all the very best in their classes.

Dave will have this record setting car in Texas in March for TX2k20. Stop by the AMS pit and say hi.

You’ll want to remember the name: Joseph Nuñez. With GT-R World Cup a few months away Joseph, an Alpha 7 owner, came to us because he was excited to start competing. His goal was to run in the Pro-Street class with a newly built Alpha X NISMO and we were stoked to help him get there. Joseph is just getting started but we already know that he will be a force in the very near future. If you get a chance check out this beautiful black and white Alpha X build at TX2K.

“Hands down 100% Team AMS this weekend, you guys did a great job. Thank you.” – Phil Davero – 1st Place Outlaw Class

The story of the Outlaw class was bitter sweet. The Alpha powered GTRs of Chicago Motor Cars and Prime Cuts Chop Shop finished #1 and #2 respectively in an all Alpha final but gremlins lead to us having to pull back the power on the cars. Unfortunately, we were never able to run the Chicago Motor Cars Alpha 22 and Prime Cuts Chop Shop Alpha 22X GT-Rs to their full potential as we were plagued with transmission issues all weekend. The AMS Technicians and Tuners were unsung heroes as they had to swap out 5 transmissions between the two GT-Rs. Pretty much everything that could go wrong with the transmissions was going wrong, it was just one of those weekends. These GT-Rs are now putting over 2000 WHP through transmissions designed to hold 600 WHP is becoming the issue to overcome. Even with those problems, the AMS crew put in some long hours, swapped transmissions, and we were able to finish in the #1 and #2 spot in the Outlaw Class!

“The Mechanics, the AMS guys, They’re the ones that made this possible to happen” – Jordan Martin – 2nd Place Outlaw Class

DriveWire and his Prime Cuts Chop Shop new Alpha 22X turbo kit chased transmission gremlins all the way through the GT-R World Cup eliminations where he finished second to the Chicago Motor Cars Alpha 22 in the all Alpha Outlaw class final. Look for them to come out swinging and make a run for the podium at TX2K. Stay tuned for updates. Headphone warning. It gets loud.

AMS would like to say “thank you” to all our customers and the entire crew at AMS who put in the hard work and we got our customers their much deserved results.