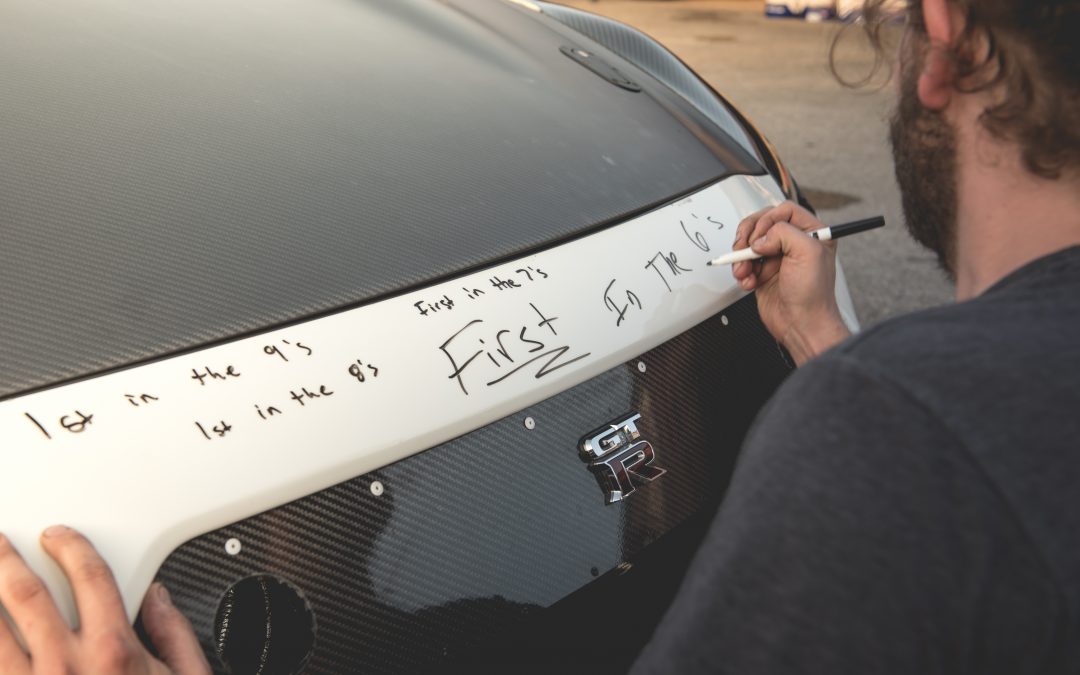 In order to understand what it means to be the first to run a 6 second pass in an R35 GT-R you have to know how AMS Performance got to this point. We have tapped former Vice President Arne Toman to share, in part 1, what it was like to be in the pits for the beginning of this road to 6. In order to tell the complete story this blog will be two parts.

What a road it’s been. For 9 years now we’ve been chasing records in the R35 Nissan GT-R. It’s funny to think back when this car first came out all the hype about how the car was not able to be modified. Even rumors that it could not even be driven at full power unless it was at a race track. The car created a buzz like we’d never seen. It was one of the coolest and most advanced cars ever made yet could “never be improved”. Turns out though it would become the best and most capable Japanese Import to modify EVER.

These cars are simply amazing. They stop, turn and GO like no other car before them. Probably only rivaled by the Toyota Supra but those obviously limited in performance due to being RWD. Some say the R35 GT-R drives itself. Being around them these days though it sure doesn’t seem to be the case. While they are a very capable car, it takes a lot of finesse to manage them in the 7 second realm.

Early on we made a video and set a lofty goal of more than doubling the stock horsepower of the GT-R. We went out on a limb and proclaimed we would build a 1000HP R35 GT-R. At the time some of us were skeptical it could even be done. Even if we made the power clearly the transmission could never hold it.

Turned out we pretty easily got to the 1000HP. ShepTrans, Dodson Motorsports and Driveshaft Shop were always ahead of the curve and seemed to have the GR6 transmission figured out. In fact for much of the development time over the past 9 years the transmission turned out to be one of the most problem free parts of the car.

From there 1500HP was the next obstacle and we ran into major problems getting the engine blocks to keep from splitting in two. They weren’t blowing head gaskets, the block was actually pulling apart! The AMS engineering team quickly dissected the problem and came up with a solution. It wasn’t too long before 1500HP became the new 1000HP.

Moving even farther along 1700~HP seemed to be the next barrier where the limits of the stock cast factory block were found. The billet engine block became the next solution. Now we are at 2500HP and sorting out the issues associated with a power level for the V-6 VR38 no one could’ve dreamed of 9 years ago.

It was amazing to witness AMS continue its tradition of setting records at the TX2k event. At TX2k10 we were the first to break into the 9’s in an Alpha 9. The following year at TX2k11 we broke the world record at the event with a 9.10@160mph in an Alpha 12. At TX2k12 we debuted Alpha Omega and set a new world record of 8.62@173mph winning the event. At TX2k13 Alpha Omega set the fastest MPH of the event with a 172.95mph trap speed. And now this, the mother of all achievements, the first 6 second pass in a GT-R or any AWD vehicle for that matter.

Many were gunning for this record. Blood, sweat and tears were spent to make an attempt at what began to feel like an impossible feat. Teams like ETS, T1 Race Development (Thank you), Ekanoo in Bahrain, and then most recently Alpha Logic in Dubai became focused on achieving the first 6 second pass.

Most notably ETS and Ekanoo were trying the hardest making heartbreaking trip after heartbreaking trip to the drag strip to make it happen. Fires, broken driveline parts and hurt engines plagued both teams. All the right circumstances had to fall into place to achieve this goal. Each pass became like pulling the arm of a slot machine just hoping it would turn up all 7’s (6’s in this case LOL). The problem is all these cars gunning for the 6’s are grenades with the pins pulled out. It’s not a matter of if something is going to break, it’s a matter of when and at this level every pass is a game of Russian Roulette with the gun half loaded.

The past few months have been an exciting time for R35 fans. Ekanoo was giving it hell out in Bahrain and they just ran out of their drag racing season for the year and decided to retire the car after many hardships. ETS documented their struggles so well and had us all on the edge of our seats as they traveled all the way from Washington State in the dead of winter to warmer climates where they tirelessly sought after the elusive 6 second pass.

Knowing the AMS team so well after 9 years on the GT-R platform it was amazing to see them came out on top. Of course we know the Ekanoo and ETS teams were trying just as hard or harder and deserved it just as much as we did. Our hats goes off to them and their struggles because we know the woes of trying to achieve something of this magnitude and it takes a special kind of dedicated team to keep going when the world seems hell bent to kicking you into the gutter at every turn. I bet in some ways they are relieved that it is over, we had a part of us that wished someone would get the first 6 just so we didn’t have to worry about it any longer. It was an unbelievable emotional roller coaster that we don’t mind being off of!

AMS being first in the 9’s, 8’s, 7’s & 6’s is something that can never be taken away. It has created quite the GT-R Dynasty. Not only that but AMS was able to be the first AWD car to break the 6 second barrier as well. Looking at the dates, at first the milestones fell quickly but as the ET’s get quicker the struggle is exponentially harder.

Records Are Made to be Broken

Will other GT-R’s break into the 6’s? We know we’ll see all the big teams who stick with it will get there. Once a seemingly impossible barrier is broken it seems to come much easier. Much like when runner Roger Bannister broke the 4-minute mile or when Chuck Yeager broke the sound barrier for the first time, we will see others in the 6’s in the future.

It was amazing to break the last real feasible barrier. Will we see a 5 second AWD car or Nissan GT-R? We don’t see how it’s possible now but we remember saying it wasn’t possible to go 6’s back in 2013. These cars are getting so fast it boggles our minds. Being old enough to witness the anemic cars of the 70’s and 80’s we don’t think anyone could have predicted the levels of power, the ET’s and speeds these cars are reaching.

Where things go from here we don’t know. As Japanese Import enthusiasts though we know the GT-R will become the next Toyota Supra without a doubt. With the car being in production for what seems will be 10 model years we’re sure we will be racing these cars years from now and will look back fondly at the road we paved.

There is so much more that went on behind the scenes to get Alpha G into the 6’s. Read the exciting conclusion to the quest for a 6 in “The Road to 6-Part 2.”