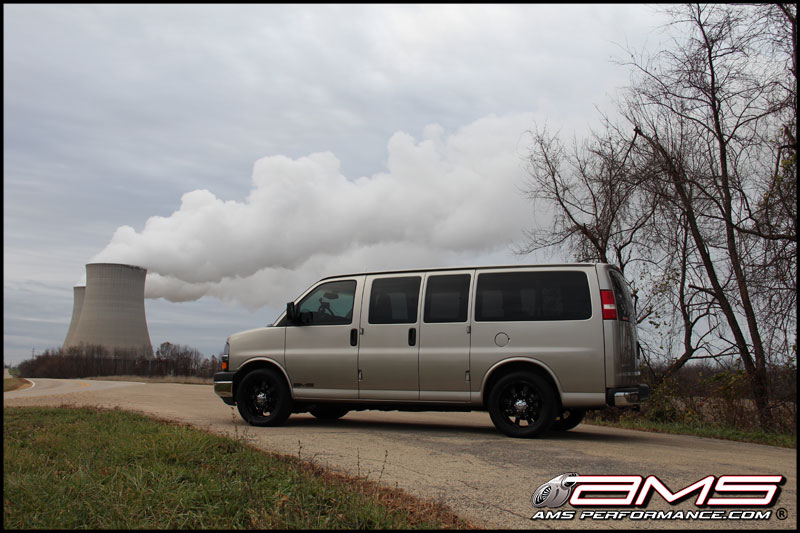 I’ve long had an obsession with Van’s.  I know, you’d think being the Vice President of AMS I’d be more inclined to build a GTR or something else we specialize in.  Instead my mind is filled with crazy ideas of modifying big, heavy vehicles that should not be fast into the most ridiculous street sleepers.

My Van fascination must’ve all started with the A-Team episodes I watched in my childhood.  For my first Van project my buddy Brandon and I built a 13 second Powerstroke Diesel Van back in 2005.  Then I converted our AMS shop Van into an A-Team Van in 2006.  Since then I got distracted building the World’s Quickest & Fastest Hearse and a couple Bluesmobile replicas but that is another story for another time…

I originally saw this Turbo Chevy Express Van in a video from a drag strip in Las Vegas in late 2009.  The title was “Turbo  Van Kills ZR-1”.   The title really made the video go viral (at least for a video about a Van).  Being a Van lover, it really caught my attention since you don’t see many fast Vans out there for good reason.  Although a simple video,  it showed this Van hole-shotting the ZR-1 which clearly had no traction but it was still pretty cool.  I remember thinking to myself, this video does not do this sweet-ass Van justice!

At the time I really knew very little about the LSX engines but this video made a real impression on me.  Fast forward a few years (and a turbo LSX project of my own) later, I stumbled upon a for sale ad for this beast.  I knew I had to have it.  After a few phone calls with the owner, Tyler, and I arranged to fly out and pick the Van up.

On the way home to Chicago all I could think about was making a few modifications and getting it to the track with some proper filming equipment to make the video that this unique creation deserved.  After making a few improvements I set out to put her firmly into the 12’s and make a video to show what this Van is all about.

Here is the video that I envisioned years ago when I first saw this Van.