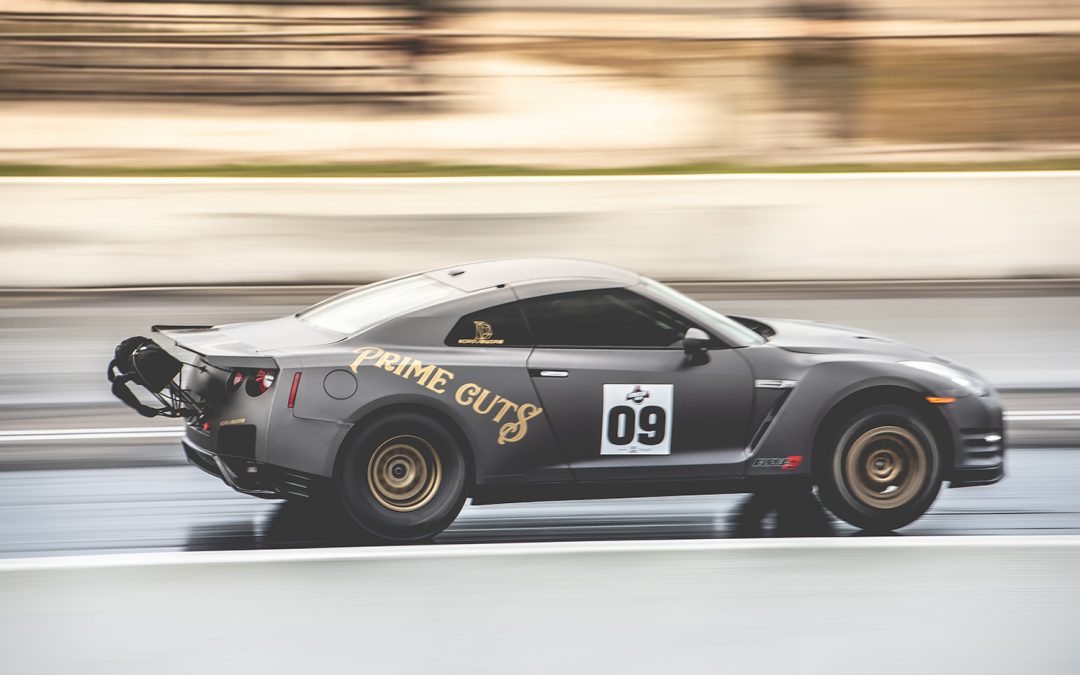 Come one. Come All. The GT-R World Cup traveled to its new home at Bradenton Motorsport Park near Tampa Florida and put on a show for the ages.

The AMS Alpha crew was represented by an army of GTRs ready to dominate their classes. The OB Prestige Auto Alpha Queen being the highlight of the Unlimited Class was set to make headlines. Chicago Motorcars and Drivewire’s new Alpha 22’s were looking to take the top spots in the Outlaw Class. Dave Rohrschneider had his new Alpha 10X on a track for the very first time. Eric Gaudi debuted AMS’ new Omega 12 stock manifold turbo kit. Jordan Campbell was a favorite in the Street Class with his Alpha 7 GTR. John Shepard and his Alpha 16 were looking to three-peat in the Pro-Street class.

The OB Prestige Team rolled into town for their very first visit to the GTR World Cup. The Alpha Queen in her signature copper wrap was sporting new Alpha goodies designed to get this one of a kind GTR into the 6’s and reign over the Unlimited Class.

The Queen had Alpha’s new BIG tire conversion which includes a tubular rear subframe and new Alpha billet knuckles. This new set up moves the rear tire further inboard which allows you to run a larger tire yielding greater grip and lowering 60′ times.

In the end mechanical issues in the driveline stopped the Queen from getting that first 6 second run but you will be sure that they will be going for that elusive 6 second pass at TX2K in March. 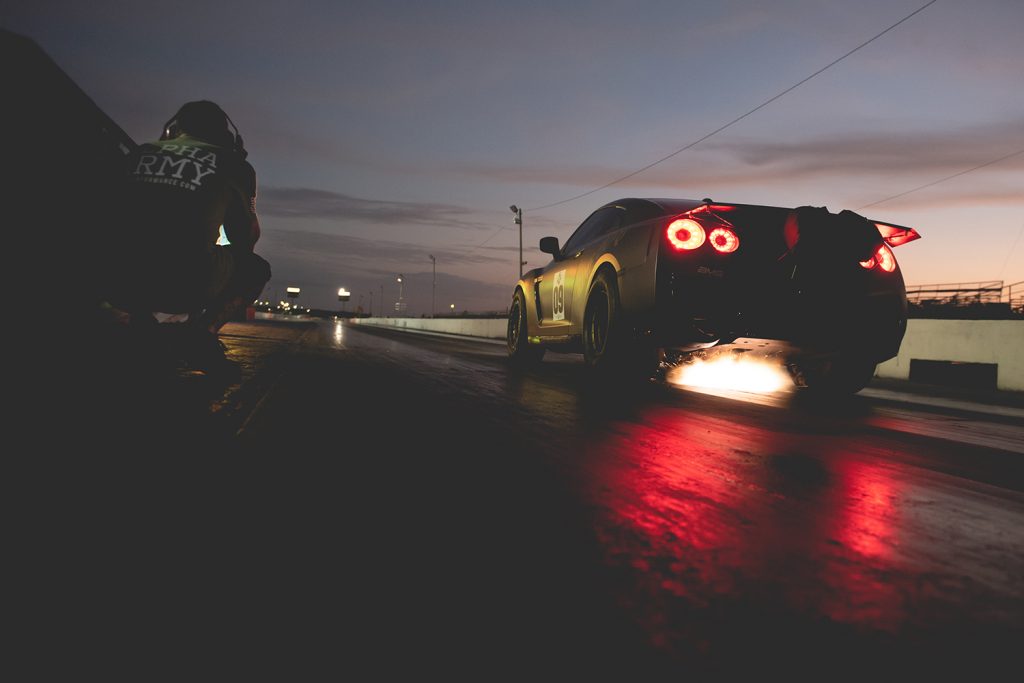 Drivewire’s Alpha 22 GTR was also running the new big tire conversion, went from an Alpha X turbo kit to the new Alpha 22 kit, upgraded to the new 18 injector carbon fiber intake manifold, and the results were nothing less than spectacular. As he piloted his GTR through the rounds of eliminations he just kept getting faster and faster.

When he lined up for the finals he knew it would take a perfect run to take home the top prize against AMS’ Dealer Boostin’ Performance. That is exactly what happened. Jordan drove his Alpha 22 to an amazing 7.11 @ an incredible 203 mph! It was a run for the record books and won him first place in the coveted Outlaw Class. But, he wasn’t finished. 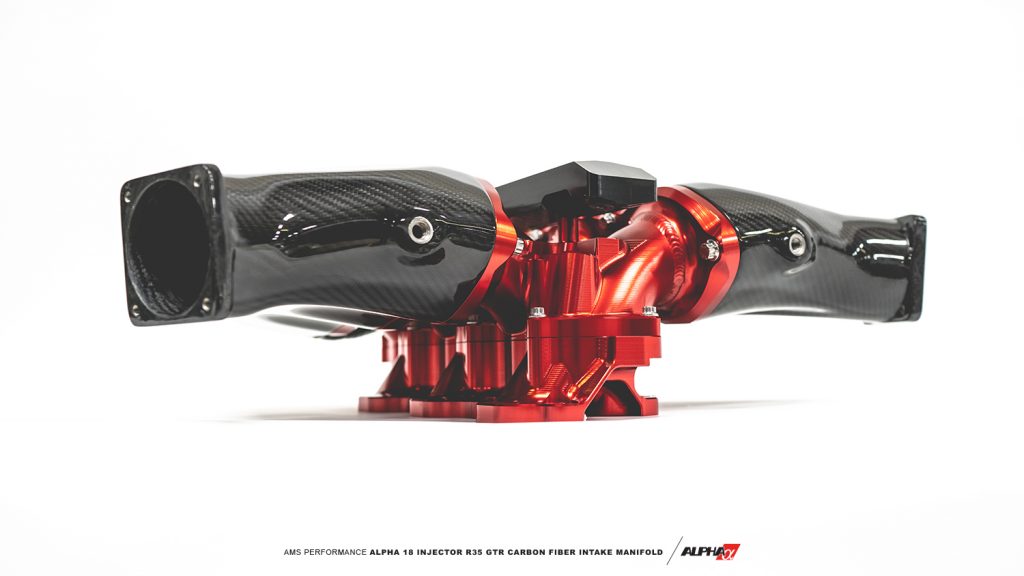 After Jordan had secured the Outlaw Class win he knew the car still had more in it. He asked the team to give it one more run before the event came to an end. He climbed into his GTR and headed to the line. What happened next was the talk of the event. The tree went green and Jordan’s car roared to life spitting fire from the exhaust. His big tires ripped at the pavement as he rocketed down the track. When he crossed the finish line the board lit up… 7.06 at 206 MPH! The AMS team erupted in celebration. It was truly a site to behold.

Chicago Motor Cars, like Drivewire, went from the Alpha X turbo kit to the new Alpha 22 kit. They too had their R35 GTR fitted with the new big tire conversion. They also went lighter adding a carbon fiber roof, hood, and trunk lid. The results speak for themselves. The Alpha 22 stock location kit with the first and third finish in the class put this kit at the top of everyone’s “want” list.

An AMS Customer and friend came to us 10 weeks before GTRWC and asked if we could build him a true 58mm setup to win the Modified Class. Never backing down from a challenge we dug into Dave Rohrschneider’s GTR and built a him a rocket. Dave had never raced in an R35 before so this event would be the car’s, “Wally,” and Dave’s test flight. Just like any good test flight there was a chance great things would happen and thats exactly how the weekend unfolded.

Dave climbed into his new Alpha 10X for the first time and headed to the line. In his very first run in the GTR he incredibly went into the 7’s! The AMS team could not believe their eyes, 7.93 @ 183! He then backed that up with an astonishing 7.58 @ 182, but was DQ’d because he went too fast!

We would also like to congratulate Christine Dodworth in her T1 built Alpha 16 who ran her first 7!