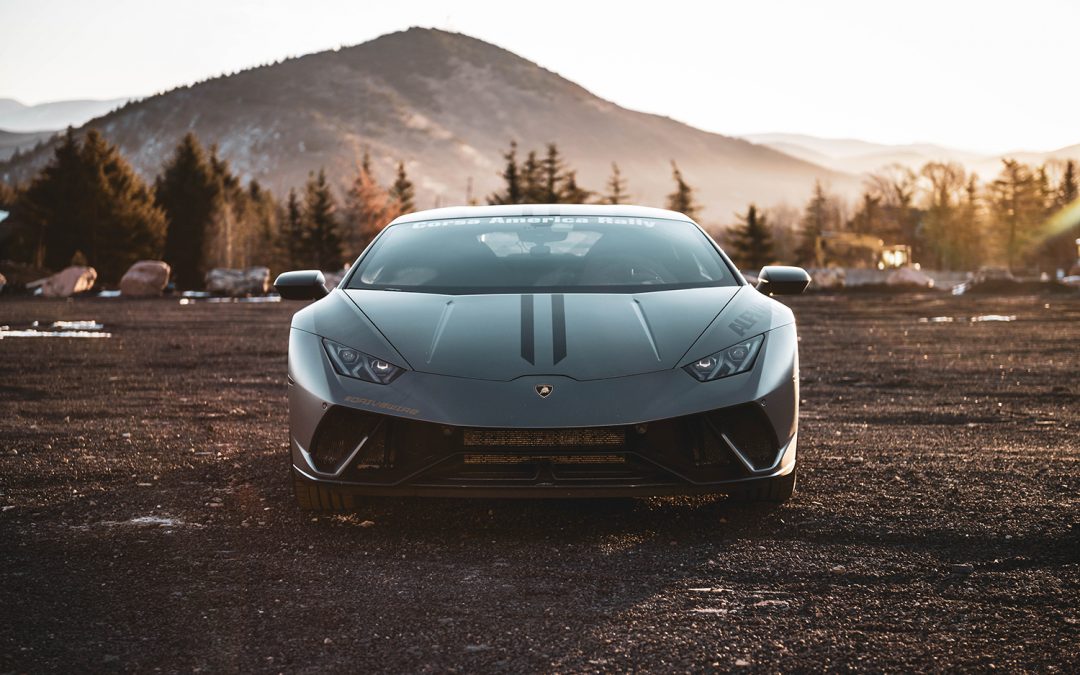 The morning air was crisp. The temperature in the teens made what leaves that were left on the trees crackle when they moved past each other as the mountain breeze lifted up the hillsides. We were at the beautiful Ritz-Carlton in Vail, Colorado for the start of the Corsa Rally. Our three car team consisted of a 1150 WHP Omega 12 R35 GTR, an 825 WHP Alpha 9 twin turbo Lamborghini Huracan, and our shop 825 WHP Alpha 9 twin turbo Audi R8. The pilots of the supercars, Sam of Nostrum High Performance, Jordan of Prime Cuts Chop Shop, and one very special guest stood at attention for the instructions at the drivers meeting. Kyle Loftis is the driver of the Alpha 9 Audi R8 and is the owner of one of the most renowned, most highly respected motorsports channels on YouTube. 1320 videos have been seen hundreds of millions of times. You can tell that he is widely known by the number of people that approach him at every stop pleading for a selfie for which he graciously accepts going against his humble nature. Kyle’s soft spoken Nebraska accent and patented gentle school boy giggle are recognized all around the globe and are in direct contrast to Jordan’s brash booming voice and million mile an hour personality. Jordan Martin is the owner of an Alpha 22 R35 GTR, one of the fastest R35 GTR’s on the planet, a new project to be revealed soon, and the driver of his Corsa Rally Alpha 9 Lamborghini Huracán. Jordan has raced GTR’s for years and during 2019’s GTR World Cup piloted his stock turbo location Alpha 22 GTR to a scorching 7.06 @206 MPH just missing a six second pass. He and Martin, AMS’ CEO, also teamed up on the Netflix series Hyperdrive. Jordan, on this rally, left the GTR driving up to our final team member Sam. Sam Barros is the Lead Engineer at Nostrum High Performance. His Omega 12 GTR is sporting a very special water injection system that will be a game changing product for the GTR community when it is released. It allows the user to run 91octane fuel like it is race gas. Sam is a rally veteran so it was an easy decision to let him lead the way over the long journey that would put these AMS built supercars to the ultimate test of performance and reliability.

We brought the vehicles to the Corsa Rally to put our newest 900 HP R8 and Huracán turbo systems to the ultimate test. 652 miles in three days at speeds, temperatures, and elevations that would stress test the systems. If there was even the tiniest of issues the next three days would expose it.

“Everybody gather around” crowed the rally organizer at the driver’s meeting. The damp underground garage was the launching pad for the rally’s 70 vehicles. The organizer continued offering instructions to keep everyone safe and out of trouble. “Stay together, there is safety in numbers,” his voice echoed off the grey cement walls. As he finished his prepared instructions the door to the garage cracked open letting in the morning light and the 18 degree temperatures. Today’s route was from the start in Vail, Colorado to Park City, Utah. As the drivers strapped themselves into their supercars and rev’d up their engines the sounds rivaled those of world class orchestras.

The Ferraris with their fast spinning V12s struck the high notes. The N/A Huracan’s V10’s were hitting the middle notes. The V8’s and the V6’s of the ‘Vettes and GT-R’s struck the low bass beats. The Alpha 9 R8 and Huracan’s turbos whistled with every flick of the throttle. We marched out of the garage and down the mountain on our way to the next destination.

As morning broke on the second day of the rally we were able to sneak out and get a few photos of Prime Cuts Chop Shop’s Lamborghini Huracan. Today’s route would take us right past the famous Bonneville Salt Flats to Las Vegas. The Salt Flats is a Mecca for auto enthusiasts. It’s a magical area where land speed records have been set since the invention of the internal combustion engine. You can’t help but look upon the area in awe knowing that you are walking in the footsteps of legends. The scene is other worldly. The extreme environment was the perfect backdrop for these extreme vehicles. This route would be filled with long, and I mean long, straight, flat, smooth paved roads. It would be the perfect test of the vehicles ability to reach high speeds and travel at those speeds for long distances. All three of the cars passed this test with flying colors. We were able to travel at incredible speeds for extended distances and all without a single issue.

Day three in Las Vegas closed out the rally with a spirited police escort to the Hoover Dam. We had put the cars through one of the toughest tests on the planet. Three days of extremes in temperature, elevation, distance, and speed had not exposed a single flaw. The Omega 12 GTR, the Alpha 9 Huracan, and the Alpha 9 R8 performed absolutely incredibly. At the end of the day each and every member of our three car team knew that they just completed something very special. It will be hard to ever replicate this experience again.