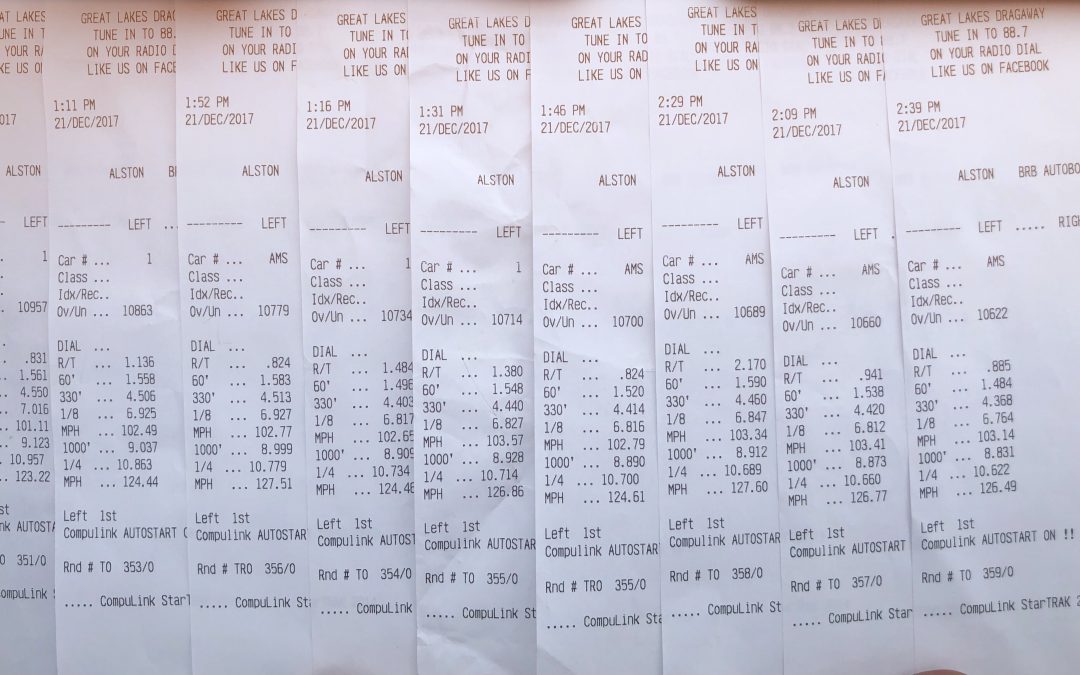 We have set the Q60 VR30 quarter mile WORLD RECORD!

With a run of 10.62 at 126 MPH we have set the VR30 World Record and become the first VR30 powered vehicle (found in the Q50 & Q60) to run a 10 second quarter mile time! All done on stock turbos and stock engine! Watch for more as we continue the run to be the first INFINITI VR30 into the 9’s.

As the last days of the year raced towards the AMS Performance Team they raced towards having the first INFINITI Q60 to reach the ten second milestone in the quarter mile. AMS has a storied history in the automotive aftermarket of breaking records. The most recent, and arguably the biggest, was being the first into the 9’s – 8’s – 7’s and 6’s with their Nissan R35 GTR program. AMS and their “Alpha” line of products have an industry leading reputation for quality and performance and the results of which have no equal. So when INFINITI USA approached AMS to develop the top of the line performance products for their new Q60 and Q50’s equipped with the VR30 Twin Turbo they knew they were approaching the future of the platform’s performance.

AMS prides itself on not only going the fastest, but going the fastest while providing lasting reliability. These are two aspects that are usually mutually exclusive. We build the highest quality components and put them through their paces in one of the most rigorous testing programs in the aftermarket industry. If you just look at the times on the slips, not the record breaking ET’s but the times of day, you can see proof that the parts we design are engineered and built to the highest of standards. The clock reading 12:49 – 1:11 – 1:16 – 1:31 – 1:46 – 1:52 – 2:09 – 2:29 – 2:39, and on each of those runs re-setting the 10 second record, and on each of those runs 60′ times in the 1.4’s and 1.5’s, and on each of those runs at over 123 mph while twice going over 127 mph are a true testament to who we are as a company. Now we have just started releasing the components that made these times possible. 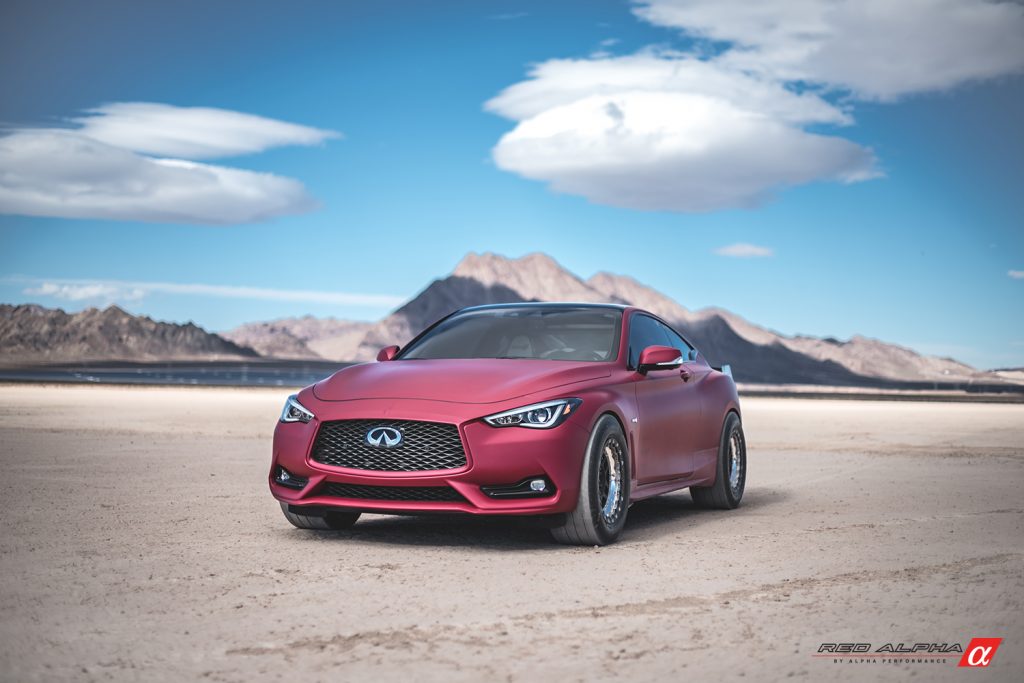 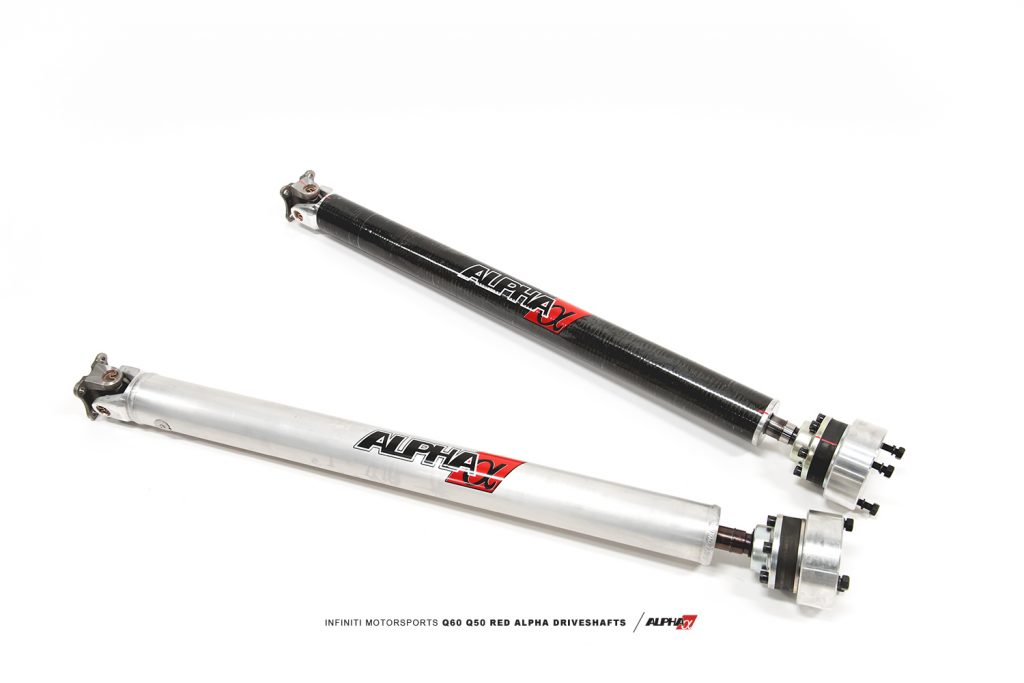 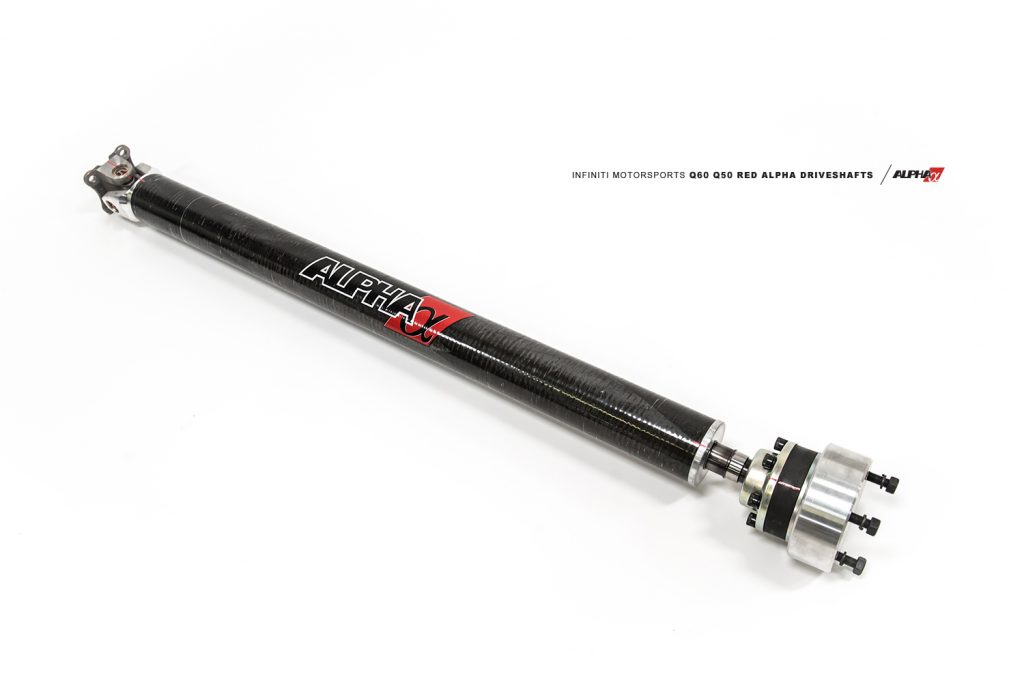 AMS was excited to dig into the INFINITI’s new VR30DDTT motor and see where we could take it. The launch of the “Red Alpha” product line will start with hardware. As we started getting more power out of the car we quickly realized that the main driveshaft was a weak point. So we teamed up with the Drive Shaft Shop and developed an Aluminum as well as a Carbon Fiber driveshaft offering.

The Aluminum one piece INFINITI Q60 + Q50 Red Alpha Driveshaft is made from 3.5″ x .125″ wall 6061-T6 Aluminum and is rated to 3464 ft lbs of torque and spun at over 9000 RPM. Alpha’s superior one piece design eliminates the power robbing sloppy center knuckle which is a weak point in the stock system. Our one piece aluminum shafts are manufactured using a pulse welding technique as opposed to mig welding. The pulse type weld creates a lot less heat resulting in a stronger shaft.

The INFINITI Q60 Red Alpha one piece carbon driveshaft version is manufactured using a new carbon fiber weave that was tested to 6800 lbs of torque! The main difference between the carbon and aluminum driveshaft is that the carbon fiber tube is more torsional than aluminum, therefore it can twist more under load resulting in a smoother transfer of power at launch or between shifts. Aluminum is already much more torsional than steel, (about 15° under load vs about 5° for steel) but carbon fiber can go upwards of 30° to 35°. It will be a significant upgrade over the stock 2-piece driveshaft. 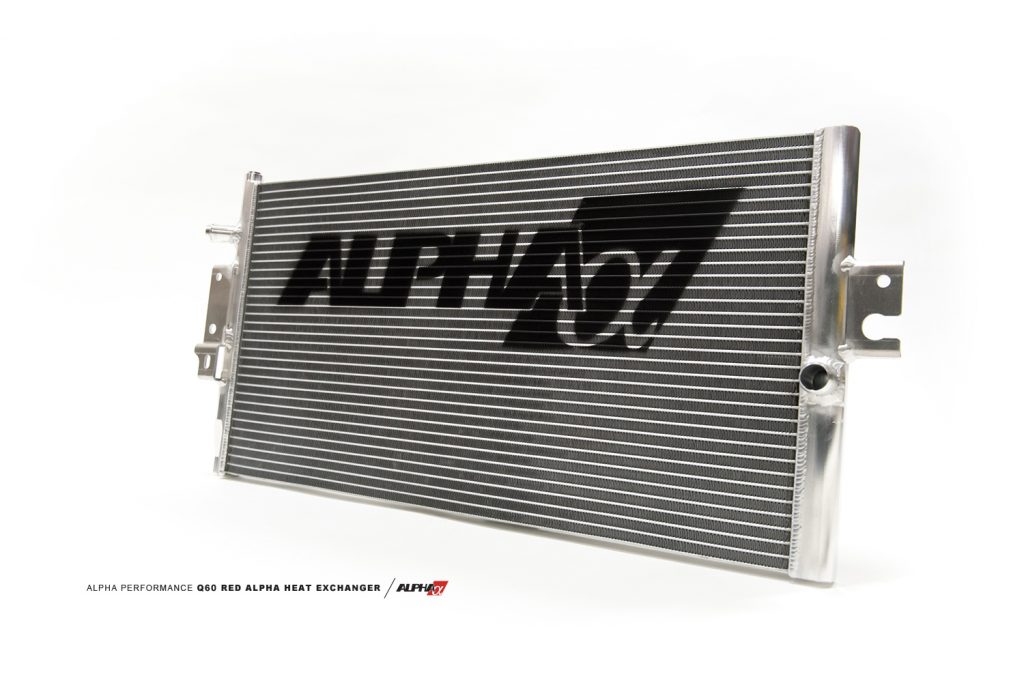 Next we turned our attention to the performance robbing heat generated by increasing the power. The Red Alpha Heat Exchanger is perfect for keeping intake temps low resulting in high horsepower. By doubling the thickness of the OEM core and increasing the frontal surface area by 151% you gain an extraordinary amount of added cooling. The Alpha heat exchanger core and end tanks hold an astounding 402% more coolant than the stock heat exchanger. You gain increased thermal capacity over the entire intercooler system by accommodating the added coolant. The Alpha Engineering Team designed the core with 22 fins per inch. The fin density allows more airflow, and thus more heat transfer through the thicker core. The Alpha Heat Exchanger is designed with OEM-like fitment which does not block or require relocation of the oil cooler. Next we turned our attention to the software. 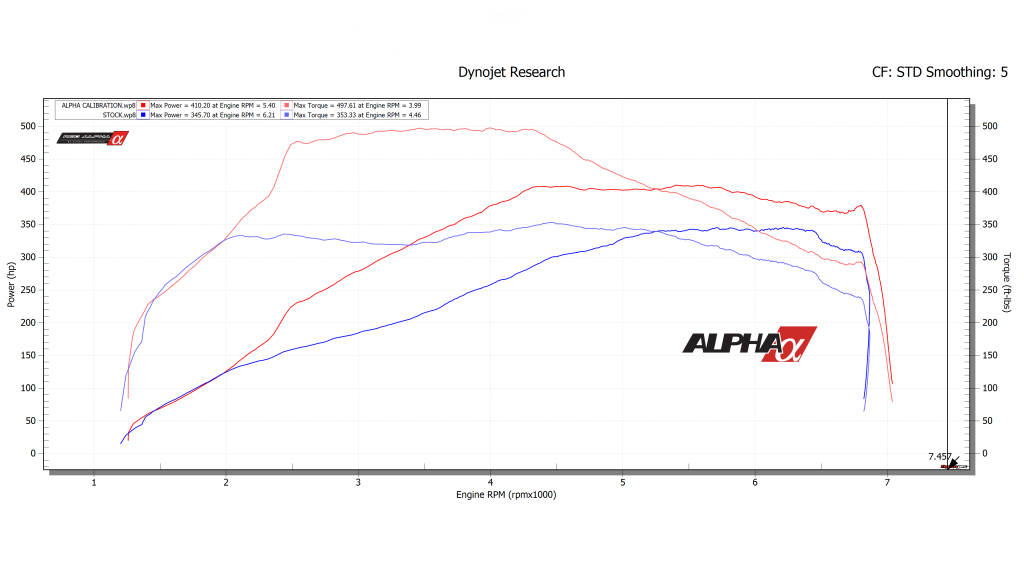 Being developed along side the hardware is a software offering using ECUtek’s tuning technology. We measured the stock horsepower output of our RS 400 at a respectable 366 WHP and 350 ft/lbs of torque. AMS though knows OEM’s are handcuffed by power robbing factors they have no control over. That is where we come in. AMS Performance found a way to gain access to the hidden horsepower and torque of your INFINITI Q60 Red Sport 400. Our Red Alpha calibration file takes full advantage of your INFINITI VR30’s untapped potential. By precisely adjusting camshaft timing, boost output, and air/fuel ratios, your 3.0L twin turbo equipped Q60 & Q50 will produce over 400 wheel horsepower and a pavement shredding 460+ ft/lbs of torque and do it reliably. 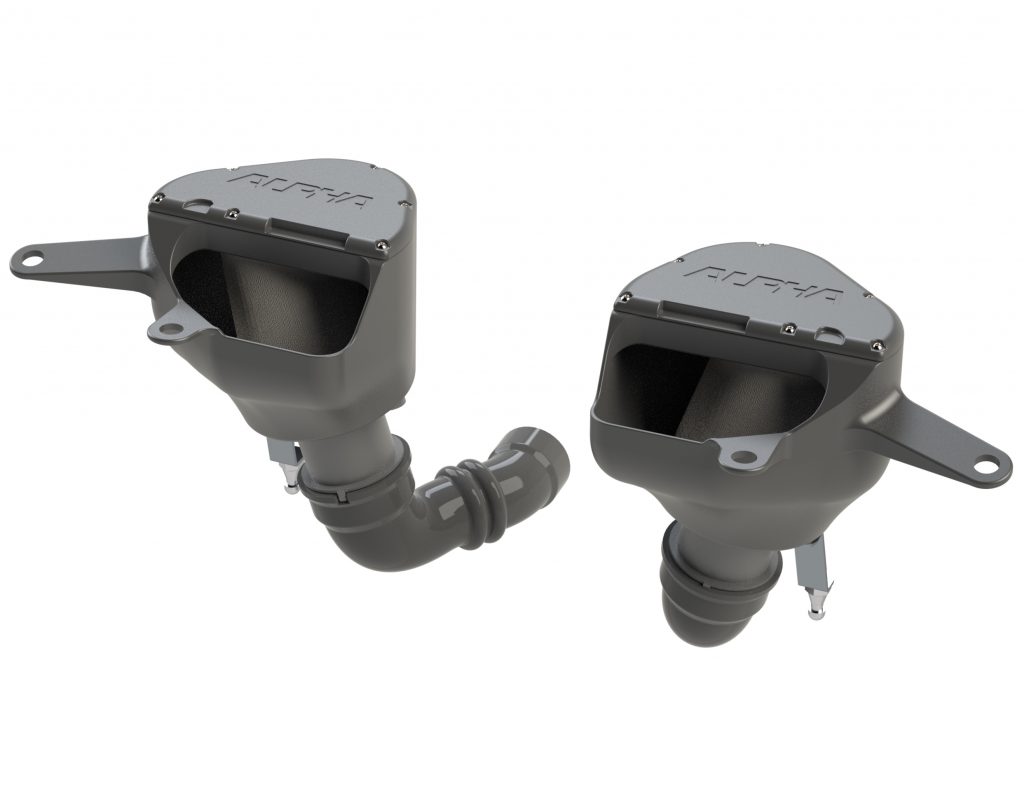 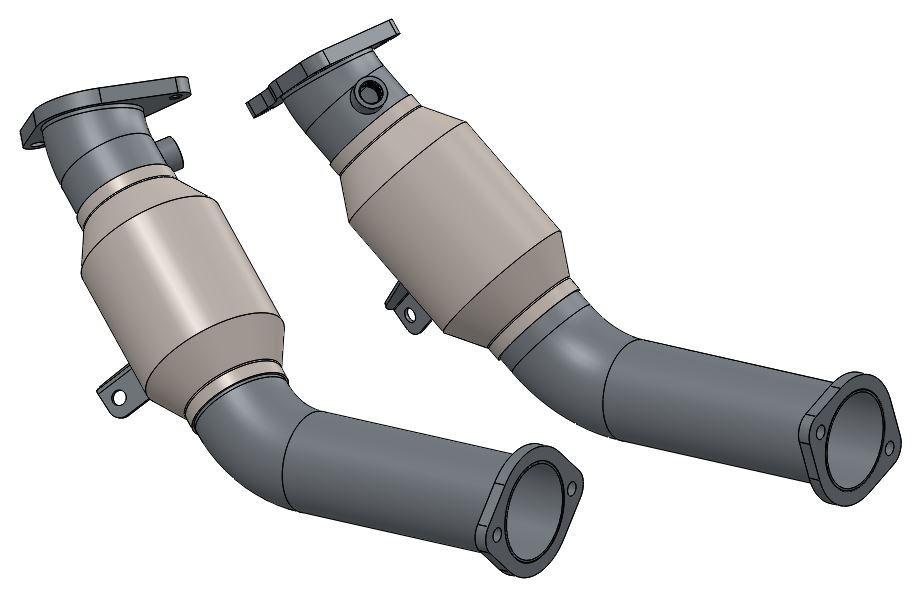 Our Engineers and Engine Calibrators believe letting the motor really breathe will yield big results and the testing backs this up. The stock car’s intakes and exhaust are holding back a lot of potential power. AMS’ mission is to make that power available to all of the INFINITI motorsports enthusiasts, and more importantly, make that power reliably. The OEM manufacturers spend a lot of time reducing turbo noise at the expense of horsepower. By letting the turbo ingest all the cold air it needs, the Q60 and Q50 Red Alpha Performance Intake System boosts power significantly. In addition, it allows you to hear your Q’s twin turbos spool up which is something you as an enthusiast can appreciate. The Alpha Performance Q60 Red Alpha Downpipes offer a more pronounced, throaty exhaust note under wide open throttle yet are subdued at idle and while cruising. These two products are currently under development.

We have more big plans for the Q50 & Q60 and are confident that more big results will follow. If you want to stay up to the second on the development of our INFINITI program sign up below.